The Glo Wubble is a big balloon like toy. You inflate it yourself using a personalized helium tank, which was relatively easy to operate.

Once the Glo Wubble was inflated, my son decided that instead of playing with his sister, he wanted to introduce the giant ball our cat, Carly. I thought Carly would be startled by the ball, but she was actually didn’t mind it floating past her on the bed.

Of course, after my son was done showing the cat his new toy, it was my four-year-old daughter’s turn to play with the Glow Wubble. 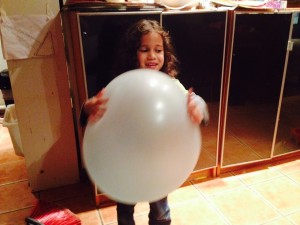 She was not giving up her toy, that was for sure. Though my son pleaded, my girl went into the bedroom and turned the lights on and off watching the giant ball glow in the dark as it bounced up and down.

The kids had an awesome time playing with the Glo Wubble. I asked them which one they liked better, Wubble X or Glo Wubble and of course they fought about that because they are siblings. My seven-year-old son preferred the Wubble X and my daughter choose the Glow Wubble. I remember loving glow-in-the dark everything at her age, so I completely understood her preference.

For more info on the Wubble toys, click here.

The is a sponsored post that contains affiliate links. I received compensation in exchange for writing this review. Although this post is sponsored, all opinions are my own.