It’s Thanksgiving today, and when I think of Thanksgiving, I remember elementary school.
I have vivid memories of coloring in Ms. Israeli’s classroom. She was an art teacher, a stern portly woman with frizzy blond hair, who wore stretch pants every single day. In hindsight, she shouldn’t have been teaching children, because she clearly disliked them. But there we were, little first graders, coloring pictures of pilgrims with giant hats, multi-colored indian corn, turkeys, cornbread, Native Americans, I believe boats were involved…maybe because the pilgrims came over on a boat. It was an idyllic depiction of the Thanksgiving feast. 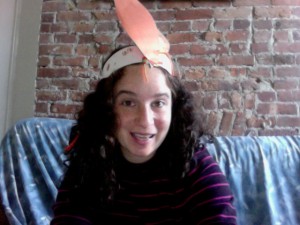 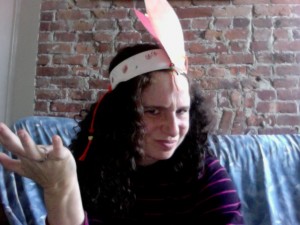 I suppose, if we extract the reality of Thanksgiving and treat it as a time to spend with our families, it can be a nice holiday. But the question is, what do we tell our kids about this holiday? As I got older and out of Ms. Israeli’s art class, and learned the grim reality about Thanksgiving, I felt duped. She (and her stretch pants) lied to us!

Do we treat this holiday as a nice time to spend with our families, or do we address the truth of what happened to the Native Americans?
What do you think? What do you tell your kids about Thanksgiving?