Home/Uncategorized/Repression caused me to have stomach problems
Previous Next 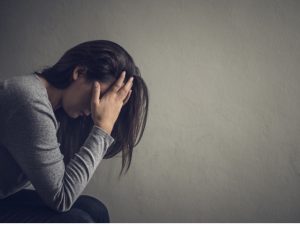 Repression caused me to experience extreme physical pain. There was a time in my life where I was not honest with myself. That differs from how I am today, as I am very honest with myself these days, but it took me a long time to get here. How did I learn to do that? Well, I suffered the consequences of trying to push down my pain. In junior high, I hid my panic and my depression because I didn’t want people to know that I was suffering. In high school, my mental health got worse. I started experiencing acid reflux and stomach pains. I was fearful for people to find out that I was experiencing panic attacks because I didn’t want to seem like a freak, but I ended up harming my body by repressing my feelings.

Repression caused me to have severe GI issues. Today, my stomach problems are still bad, but they are not as horrible as they used to be. In high school, I remember experiencing panic so severe that I would wake up and vomit bile because I could not eat. That continuous vomiting caused permanent damage to my esophagus and stomach lining. Eventually, the reflux combined with the perpetual vomiting, I developed an ulcer. It was incredibly painful and I was always doubled over in pain to the extent that I could not walk. I knew that something was wrong, so I went to the doctor. To treat my ulcer, I had to take Nexium (by the way, this is not an ad for Nexium) for a long time and then I had to switch to some other thing that I don’t remember the name of. It made me angry that my mental illness had caused my body that much damage.

I started pondering and thinking to myself “what is causing all of these stomach issues?” Then, I realized that they were due to repressed emotions. I never told people how I felt. I hid a lot of myself from even my closest friends, but especially from others that I interacted with on a daily basis at various jobs and at school. After I healed from my ulcer, I decided then and there that I was no longer going to lie to other people, or to myself. If I could possibly tell the truth, I would. Honesty is the most important thing, but in order to be honest with others, you need to be truthful with yourself, and that’s what I made a commitment to do.

I value my health, both mental and physical. I don’t want to unintentionally hurt myself again.

Now, I don’t always achieve this goal. Sometimes, I lie to myself when I don’t want to face pain, but I realized that once I started being honest with myself, my stomach problems improved significantly. I stopped having reflux as often. As long as I didn’t eat acidic things and I was honest with myself, things were better. Still, I struggled at times with how I view myself and with how others view me. To this day, I struggle at times and seek validation from others, but for the most part, I am who I am. I feel insecure sometimes, but even then, I say “I feel insecure.” I verbalize it. That’s me and that’s real. If I think that I know what I’m doing, I say “I think I know what I’m doing.” Honesty is such a powerful tool. Repression held me back from experiencing my true self and I will never let that happen again.