My son and I both have OCD and the other day our OCDs had a competition. They wanted to see who would be the stronger OCD. It ended up being a tie. We have similar personalities and are both quite introverted and anxious. It was 2 am, and I accidentally knocked over my almost 10 year old’s Lego structure that he worked tirelessly to build. He has insomnia sometimes, which is why he happened to be awake at this insane hour. Don’t worry, we’re working on it and it wasn’t on a school night thank goodness.

There were some army figures on each side of the lego structure one side was the Germans and the other side was the U.S. troops. They were fighting against one another and he was determined to create an accurate scene. He has recently become fascinated with World War II and has been asking me many questions. I told him that his great-grandfather served in the army. I have to find the pictures to show him. So anyway, I knocked this structure over and he screamed and cried. He was so upset that his hard work was destroyed and he needed to fix it immediately. It was so late and I still wanted to help him, but I couldn’t physically do it. I needed to sleep. I said, “I promise you I will help you rebuild this in the morning, but mommy needs to sleep right now.” He couldn’t accept that. His OCD was making him have the compulsion to repair his broken Lego structure and he wasn’t able to detach from this compulsion.

I felt horrible for a multitude of reasons. First, I wasn’t sure that I was doing the “right” thing as a parent. I had made the blunder of breaking his structure and I felt it was my responsibility to fix it. However, it was so late at night! Another thing that went through my head was a tremendous pain that I felt seeing him have this compulsion. I began to cry because I didn’t want him to experience this suffering. I didn’t want him to hurt with the symptoms of OCD. Unfortunately, I can’t control neurochemistry.

So I went into my bedroom and I cried. I screamed into my pillow out of frustration because I didn’t want my kid to hurt. I wanted him to be able to feel happy when he looked at his Legos and not be disturbed that they weren’t in place. After I freaked out, I came back and we talked about it. We rebuilt the structure together even though it was 2:30 am. We did it. And I still feel guilty for knocking it over. But it happened. Our OCDs will meet again, in due time. I can be the best mother I can, and I (like every other human being) am deeply flawed. I will fall on my face. I will crash hard and that’s just part of life.

But I have a fierce love for my son that will always stand strong, and he knows that OCD be damned. 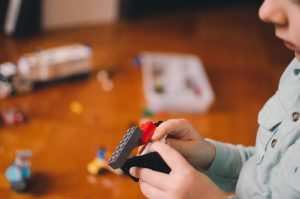