Home/Uncategorized/I’ll Have a Depression Sandwich Please
Previous Next

Nobody goes to the store and orders a depression sandwich because nobody wants to be depressed. So why would you spend your time standing in line waiting to order something that makes you feel bad? You wouldn’t, however, sometimes you don’t even realize that you’ve had a depression sandwich. Did somebody force feed it to you? Not that you’re aware of. But all of a sudden you are incredibly depressed and you don’t know why. Can you imagine if you went to a restaurant, ordered spaghetti and meatballs and you were served salmon and rice? That would be strange and you would probably complain (nicely) to your waiter. What if your waiter then came back with “sorry, you’re just going to have to deal with the salmon I gave you.” That would be weird and also frustrating and you might even become enraged. That is what people who suffer from depression feel like.

For me, when I feel depression coming on I get angry at first. Not this again! I thought it was over, why do I have to deal with this garbage again? Depression does not care about what you want, if you ordered it, if you asked for cheese or extra lettuce or if the bread is gluten-free. Depression doesn’t believe in vegetarianism or dietary restrictions. If you get a depression sandwich it has whatever depression put on it. So when I get served with depression, I’m mad, and I don’t know how to handle that anger. Usually, depression and anxiety come together in a lovely package deal. I have the depression sandwich with anxiety sauce. That’s so not what I ordered! I wanted a hamburger.

I thought this wasn’t supposed to happen after I got out of adolescence. I spent all that time in therapy as a teenager and I still have to deal with depression. This is total garbage and I want to complain to the manager of this restaurant. Also, the plate is dirty and there’s probably a hair in the sandwich, I just know it. Why didn’t anyone warn me about coming here? Then again, that’s depression for you. It hits with no warning, barges into your life, and demands to stay. You can’t just evict it, because it’s not down with that. That depression sandwich is going to sit on the plate until you eat the entire thing. You don’t know how long your stomach will hurt for afterward, could be a day, could be months.

If you get served a depression sandwich, I am truly sorry. I wish I knew who you could complain about it too. I’ve been trying to figure that out for years. I do know that there’s hope. After you eat it, eventually you will digest it and there will be other sandwiches in your life, ones that taste amazing and don’t demand that you eat them and aren’t served on dirty plates. Your happiness sandwich is on the way, it just might take a while to show up. But it’s coming, 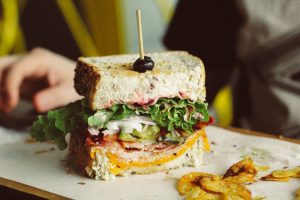