Home/Uncategorized/Blogging Made Me a Stronger Person
Previous Next

When I first started blogging back in 2009, I was conservative about what I shared. I talked about my kids and my life as a new mom. It was a fairly innocent blog at the time. I shared anecdotes about daily life raising children in New York City. It was a nice journal of what it was like to transition from being a single person to having a partner and kids. I loved being a mom and I still do, but it’s not the entirety of my identity. I am Sarah Fader, a mom, a writer, a sensitive person, an author of several books, the founder of a mental health nonprofit organization and much more. But at the time that I started my blog, I was focused on being a mother.

It was a new role for me and I didn’t know what I was doing. I also didn’t know what I was doing as a blogger, and I still don’t actually “know.” I’m sure that I am doing things differently than many other people do them. I have always been that sort of a person, though. I write what I write and I do what I want to do. That’s a good quality but it can also get me into trouble too. I want to be able to be candid, but it’s difficult to put myself out there when there are people who might misunderstand me. That’s what happened at first when I started straying from topics other than parenting on my blog. One of the first things that I ever covered other than being a mother on Old School New School/Mom was mental illness. I have Panic Disorder and that’s something that I started speaking about openly on my blog. It was scary at first and I did talk with it with my psychologist in therapy about it when I began opening up. My psychologist was supportive and glad to see me being candid about my experiences with anxiety.

The more I spoke about mental illness online the easier it became to talk about it both online and in “real life.” My online friends were and are supportive when I shared my journey and then when I created www.stigmafighters.com where other people could share their stories. I was so excited to create a safe space for people to share their stories about living with anxiety, depression, bipolar disorder, schizophrenia and many other mental illnesses.

The more I talked about mental illness it became second nature to me to speak about it, whether it was from my own perspective or I was supporting a friend through a tough time. I felt empowered when I was able to give a voice to the voiceless. It made me feel happy to be able to provide that platform to others.

There were things I began to speak about on my blog that people also didn’t like so much, like when I wrote: “Three-Year-Olds Are Assholes.” The Internet crucified me even though it was a viral blog post on The Huffington Post. People told me I was an asshole and a terrible mother. It was hurtful at first and I tried to talk back to the trolls. I attempted to reason with these people and convince them that I was a good person, but I was unsuccessful. I took their criticism to heart because I am sensitive and they took my sensitivity and attacked me even more.

In hindsight I am so glad that I had the experience of being attacked online, because it made me so much stronger. It allowed me the opportunity to realize that I know who I am, and I don’t need to let other people tell me who that person is. I am Sarah Fader, a writer, a sensitive person, a mother, and much much more. No one online or in real life has the right to tell me who I am, and I will fight against that each time they try to. I will stay rooted in myself and know that I am doing the best that I can. I will never stop writing, I will never stop speaking my truth and I will never stop being who I am and neither should you. And that’s what blogging taught me: how to be strong and how to be unabashedly me. 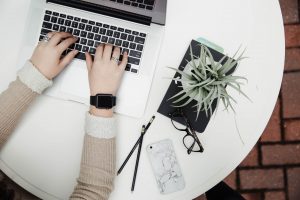