Home/Uncategorized/He Didn’t See The Rainbow, But I Did – Part 1
Previous Next

Evan and Bryan were two brothers who did everything together. They were twins, both age 15. Evan was adventurous and Bryan was shy. They were brothers but also close. Evan loved to rock climb, walk in the woods, go swimming in waterfalls and drag his brother on all of these excursions. Bryan was more cautious than his twin brother, but he admired his audacity and appetite for life. Evan wanted more for Bryan. He wanted him to come out of his shell, to experience the world. It was harder for Bryan to do these things freely. He was scared of everything, bugs, people, even going outside terrified him. The only way he was able to do anything was with Evan by his side.

Though they were twins, they looked completely different from one another. Evan had one blue eye and one brown eye. Bryan’s eyes were both grey, but they looked blue in a certain light. Evan had brown hair with a single strand of grey in it, at the front. He looked a little like a skunk. It was odd that a 15 year old had a grey streak in his hair, but going grey early ran in their family. Bryan had dirty blond hair that got lighter during the summertime.

Evan’s grey streak marked him. People remembered him as different, and he was…different. He was wild and did as he pleased. He was impulsive and loud. Meanwhile Bryan spoke few words and kept his thoughts inside. Still, his wilder older brother (by one minute and three seconds) knew what Bryan was thinking, despite his intention to keep his thoughts to himself. Sometimes it frustrated Bryan. He wanted his thoughts to himself. But somehow, Evan knew exactly what he was thinking all the damn time. It was remarkable how he could mind read. Perhaps it was the fact that they had shared the womb together, or that they shared a bedroom, sleeping on beds across the room from one another. Whatever the case, Bryan’s thoughts were heard by Evan.

“How do you always know what I’m thinking?” Bryan asked Evan one day.

Evan smiled and pointed to the small grey streak on his head. He didn’t say another word. 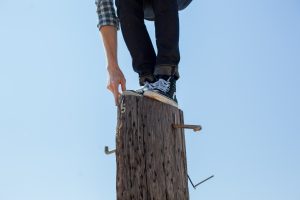