I’m going to admit it, I’m a huge dork. I play Magic The Gathering. Today I went to a “Geek Store” in Brooklyn to pick up some cards, and I ended up playing Magic with a few guys.
Wil wanted to kill me when I got home, because I spent three hours there and he was alone with the kids. Sorry babe!
Even though I only recently started playing Magic again (after a 15 year hiatus) I beat two out of the three guys I played with using my Black and White token deck. The first two guys were really nice.
The last guy was a total asshole.
Everything that came out of this guy’s mouth was just mean. First, I introduced myself:
“Hi, I’m Sarah.”
“Hi, Joe Smith.” [For the sake of the anonymity we’ll call him Joe]
“Oh, we’re going by full names. Okay [laughing] I’m Sarah Fader.”
“No, you’re not as cool as me. Joe Smith is much cooler.”
“I think Fader’s a pretty awesome name actually.”
“No.”
I don’t even know this guy, and already he’s throwing sarcasm around. Yeah…no.
I had my cards facing his cards so he could read what the creature cards said. Like this: 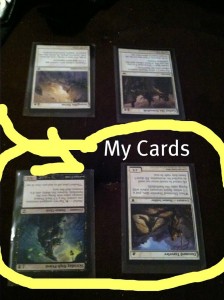 He took a look at my cards and said:
“I like that your cards are facing me, and what I mean by ‘I like it’ is that I don’t like it at all.“
“You’re being mean today, huh Joe?” Said the owner of the store.
Suddenly out of nowhere, I don’t know what came over me, I said:
“Yeah, he’s kind of being a dick.”
“Uh, I would call it being playful, but okay,” Joe said with a shrug.
The rest of the game was awkward enough. I was embarrassed that I outright called him a dick. I don’t know what came over me. I guess I was irritated. I came there to play Magic, to take a break from the kids, not to deal with his sarcastic nonsense. I didn’t even know him.
I didn’t beat him, which I’m bummed about because he was so annoying.
Don’t get me wrong, I can be as sarcastic as the next person, but I try not be an asshole. It’s a delicate balance.
What do you think? Are you sarcastic? Is there a time and place for sarcasm?