In 1985, an American television sitcom made it’s debut on ABC. It was about a family living in Huntington, NY (Long Island for those of you that don’t know). The father was a psychiatrist, who worked from home, the mother was a journalist, and they had three kids, two boys and a girl, two teenagers and a little boy who was of undefined elementary school age. The oldest boy was a perpetual trouble maker, and the teenage girl was a goody-goody type. If you grew up in the 80s chances are you can guess the name of this show.
That’s right, it was called “Growing Pains” and it starred Alan Thicke, Joanna Kearns, Tracey Gold and the the infamous Kirk Cameron, who (by the way) is now super Christian and married to his girlfriend from the show, Chelsea Noble.
It sounds like such a sweet name, right? Growing Pains, oh how cute! As the kids grow up they experience mild emotional and physical pains that concurrently happen with growing up.
Well, folks, the reality of the situation is that Growing Pains are not mild or cute in any way, in fact they are painful, severe and shocking.
Last night Ari woke up at 1am screaming his head off. 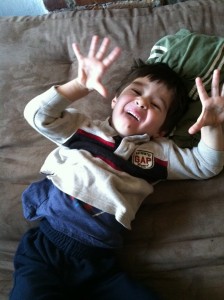 Wil was sleeping in the bed with him, and asked him repeatedly “What’s wrong?”
His responses were incomprehensible and he continued to moan in pain.
After about ten minutes of this behavior, Wil was mentally and physically exhausted and he yelled to me across the apartment:
“Babe! Go in there with him please!”
So I slept walked into the bed with Ari and rubbed his back while he screamed his 3 3/4 year old head off.
“Does something hurt?” I asked him groggily.
“MY KNEE!!!! MY KNEE HURTS!!!!!” And with that, he continued to scream and writhe in pain.
I just held him, while he screamed. Eventually, he calmed down, and then he climbed back into bed with Wil and went to sleep.
I remember being around eight or nine years old, and complaining to my mom that my own knees hurt. I can’t remember the pain exactly, but I do remember that it was alarming enough to report. My mom comforted me by saying:
“Don’t worry honey, it’s probably just growing pains.”
The thing is whoever named the Alan Thicke show has their head up their ass. Growing Pains are not adorable, they are scary and jarring, and the poor kid has no idea what is happening to him! I just want to know when these things are going to stop. When will Ari get some relief from waking up in the middle of the night in excruciating pain?
Has anyone else experienced growing pains personally, or with their own children?