My old friend Evan posted a link on Facebook the other day that made me smile. It was to a site called Exploding Rabbit, which recreated the old classic eight bit Nintendo game Super Mario Brothers. 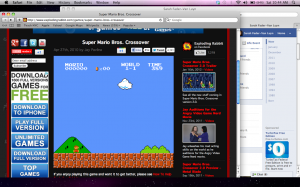 You can play the game using the ‘Z” key to jump, the “X” key to shoot fireballs, and the arrows to move Mario. Here’s the other awesome thing about this game, you can choose characters to be other than Mario and Luigi! You can be characters from other old school Nintendo games, like Link from Zelda or Mega Man! How cool is that?
Ari was intrigued by the music, and he wanted to play immediately. 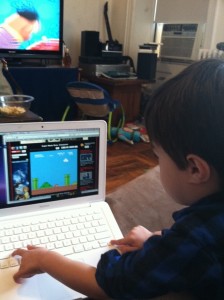 But when the mushroom killed Mario within 30 seconds of playing the game, he announced
“I don’t want to play this anymore,” and sighed deeply.
Upon seeing this interaction Wil said:
“What does he need with Nintendo? He’s got XBox and Playstaion 3!”
“Babe, ” I said sternly “He needs to start with the classics!”
I feel it’s important for Ari to have a solid video game foundation.
I’m all about hooking up our old school Nintendo to the TV and showing him games like Super Mario Brothers, Arkanoid, Mega Man, Zelda, Anticipation and Mike Tyson’s Punch Out.
Despite Ari’s initial reservations, today I opened up Exploding Rabbit again for myself, I wanted to play old school SMB, and Ari announced:
“No, I wanna play!” 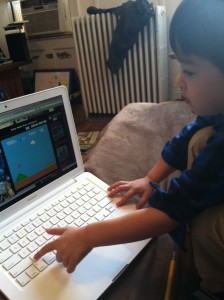 He’s starting his video education early. What do you think? Video game fans, would you introduce your kids to the original Super Mario Brothers? Or would you move on to the modern systems, like Playstation 3 and XBox?