Home/Uncategorized/I Have a Confession To Make
Previous Next

I have a confession to make. I’m addicted to my IPhone. 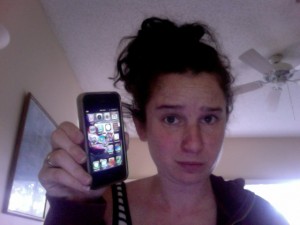 I have a mixed relationship with technology. I love the convenience of certain aspects of it; for example being able to order items online like diapers, movies, food, furniture, clothes, pet supplies and collectibles. I can do this all on my phone! There’s even an amazon app for Iphone’s sake! 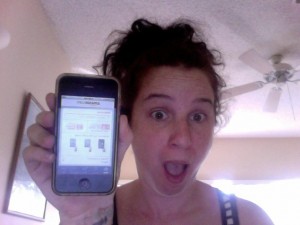 One can pretty much do anything on the Iphone. I use the Iphone the most for communication: 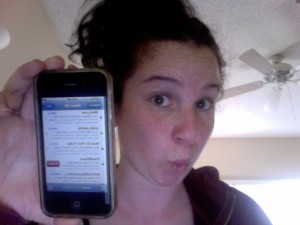 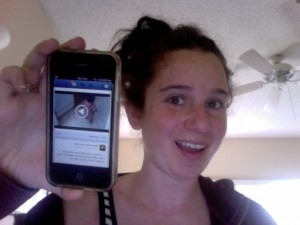 And, of course texting. 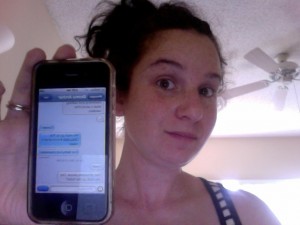 Like I said, I have a love/hate relationship with technology. I’ve previously written about how my old cell phone made me lazy. But this…THIS…is out of control. I have to get a handle on myself.

I was at dinner last night, in beautiful Fort Lauderdale with my dad. We were eating Vietnamese food. I put my phone down on the table like this: 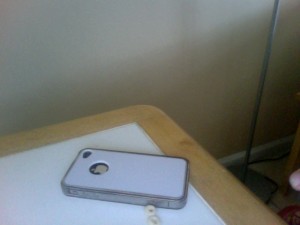 *Note, there were no Cherrios at the Vietnamese Restaurant.

The phone was facedown. The whole time my dad and I were talking, and he is a fun interesting fellow, I was itching to pick up my phone. What if I got a Facebook notification? What if there was a text message waiting for me? What if someone was trying to call me. And then it hit me,

I am totally, sickly addicted to my phone. I told my dad:

And then…something miraculous happened he said: 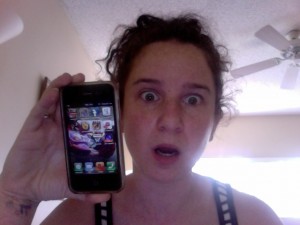 My dad confessed that he is also very much addicted to his Iphone.

“You can do anything on this thing!” He went on to say. “I have all my music on here, I’m constantly looking on IMDB (Internet Movie Database) to see who was in what movie. Sometimes if someone wants to know the answer to something, and we can’t figure it out, I google it on my phone!”

I wanted to hug him. We both had the same problem. And then something else happened. I started to get mad…at my phone. 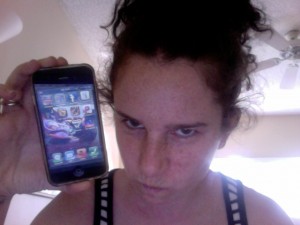 This small device that (theoretically) was designed to make my life easier, was becoming an addictive nuisance. It was impeding on my connections with real people and things! 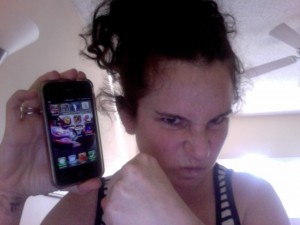 I found myself longing for the days before cell phones. When you made plans with someone, and you were running late, you’d better hurry because there was no way to tell them that you were running 15 minutes behind! If you wanted to talk to a friend, you had to consider when they were at home, because they were not always accessible to you. If they weren’t home, you had to leave a message on their answering machine!

Sometimes, I just want to throw my phone out the window, because I certainly don’t have the self-control to stop looking at it.

It’s become apparent that I have to do something about my problem. So I’m starting with this: 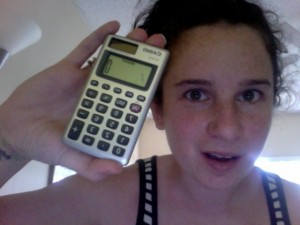 I’ve known his family since I was six years old, or thereabouts. He’s really nice, and he even says “hello!” 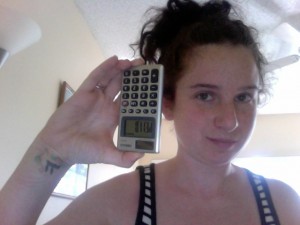 I’ll consult him instead of my phone the next time I need to add something up, or subtract, or multiply something. He can’t be used to Facebook, text or email, but he’s a start. He’s a symbol of the fact that I am taking technology back. I’m kicking it old school a little bit.

Is anybody with me on this? Are you addicted to your Iphone?