Today at 4am, Samara got a 1st birthday present from the TSA. We were at the Fort Lauderdale airport and I was carrying Samara in the Ergo on my back. 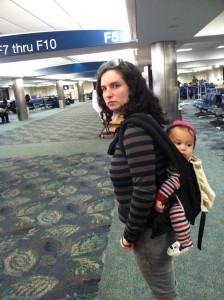 Apparently, the TSA thought I looked suspicious and when we entered the security checkpoint, they asked me to step aside with the baby in the “backpack,” which I guess they’d never seen before.
“You can leave the baby in there,” they said falsely reassuring me. I went through the metal detector, and thought that I “passed,” but instead I was told to move to the right of the machine for further inspection.
Once they had sufficiently cornered me, they told me they needed to “test my hands.” The TSA agent whipped out a white cloth.
“What’s on that?” I wanted to know. I didn’t want them to put extraneous unknown substances on my hands since I am handling my own children.
“Nothing.” The agent replied mysteriously.
The TSA agent placed the white cloth into a machine and it beeped. He then called over another agent, who turned to me with an overly serious expression and said:
“Ma’am, I’m really sorry about this, but your hands are setting the machine off. We’re gonna have to pat you down.’
“What?!” I exclaimed “Is this because of the Ergo? Can’t I go through the machine again and take it off.”
“No, I’m sorry, we have to search you.”
I was so angry. It was Samara’s birthday, we had a flight to catch and I was not in the mood to be felt up by someone I didn’t know.
“Don’t worry, ” The agent said “It won’t be him who searches you.”
Instantaneously, and seemingly out of nowhere, two female TSA agents materialized and took my into a private room.
“Ma’am, I’m gonna have to pat you down. This will include some sensitive areas.”
“Okay…”
“I’m going to have to pat the baby down too.”
“Okay,” I said again. “By the way, it’s her birthday, she’s one.”
“Happy Birthday!” The two agents said simultaneously.
The agent patted my breasts, my inner thighs, my crotch, my butt, and all over my body. There was no reason for this, in my mind. I wanted to scream, but I couldn’t. I wanted to make conversation, but it was tough. The best I could muster up while they were touching my crotch was:
“At least they have female agents doing this.”
“Yeah…” The agents said with a chuckle.
Wil, my parents, Samara, and Ari were waiting for me, nervously on some benches near by.
We were going to miss our flight if this took any longer.
After Samara and I were searched to their liking, they went off to test the potential residue on our clothes. They went out of the room and came back within 45 seconds.
“You’re clear. Happy Birthday!” The agents said.
Though they were relatively friendly, I felt violated. 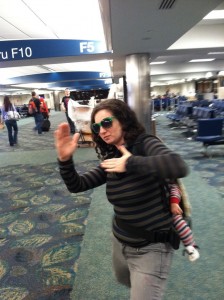 Was that all really necessary? Couldn’t I have just taken the Ergo off?