Home/Uncategorized/I Got Lost in Bed Stuy, And Then I Learned How to Wear My Baby
Previous Next

My friend Chana Leah invited me to a baby wearing meeting at store called Caribou Baby here in Brooklyn. Since I frequently wear Samara in the Moby Wrap, I thought it would be fun to go.
I tried to call my friend Cordy to see if she wanted to go, but she (being a mom of two girls three and under) dropped her phone in the toilet, so I couldn’t get in touch with her. Instead, I talked to her husband, Chaim, who encouraged me to leave the house. I was having second thoughts about going to this event, and I was particularly feeling anxious about meeting new people.
I posted on my Facebook status that I was headed to Billyburg (that is slang for Williamsburg, a neighborhood in Brooklyn, for those of you non-New Yorkers) and immediately, my friend Alicia, from college, replied with something like “Where?” I can’t remember exactly what she said because I have no brain right now. She works in Bushwick, so Williamsburg is really close to her office. I told her to call me immediately. She did, and we decided to meet up for lunch at a cafe near her job.
I piled two two kids into the car and off we went.
All was going well (Ari was pointing out the green lights and the red lights, and Samara went to sleep) until I realized that I had absolutely no idea where the hell I was going.
Suddenly I found myself lost in Bed Stuy. Okay, I thought to myself, no problem, my phone has a GPS, it’s a Garminfone. I’ll just ask it where to go!
I tried to plug in my location to my phone, and I got a scary error message: “No map data available for your location” it said. I wanted to cry. So as I drove around in circles trying to find out where I was, I called T-Mobile customer service on speaker phone. I can do that safely because my phone attaches to the windshield.
Each time I called, I was disconnected. I called over 15 times. I tried different permutations of numbers to get a representative, I tried not dialing any numbers at all, it didn’t matter what I did, it all resulted in not reaching a live human and getting hung up on. It was incredibly frustrating. 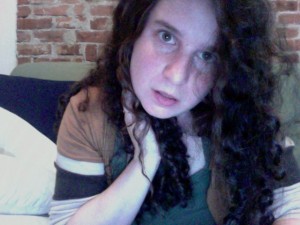 I even tried screaming profanities at the T-Mobile automated system, but that didn’t work either. In fact, I think that made the system more confused, and in those cases, I got hung up on faster.

Finally, after asking five different strangers how to get where I was going, I met Alicia for lunch. I parked illegally and prayed I didn’t get a ticket.
Ari had a chocolate muffin, I had a mozzarella tomato, and basil sandwich and a latte, because I needed some caffeine after being lost for an hour, and Alicia had a grilled cheese.
If you’re still reading this, you’re awesome. 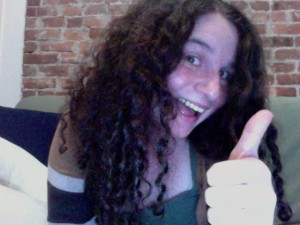 After lunch, Alicia went back to work and I texted Chana Leah that I was going to be late to the baby wearing meeting. I didn’t get a ticket, which was awesome.
I managed to find my way to Billyburg from Bushwick pretty easily. That was a refreshing change from being lost for an hour.
I got to Caribou Baby and I immediately liked the store. It had a hippy vibe, and was filled with eco-friendly baby products. I wish I had pictures of it, but I was in a rush to get out of the house, so I totally forgot my camera. The only picture I managed to take was with my phone, and it was of the kids being cute. It has nothing to do with baby wearing. 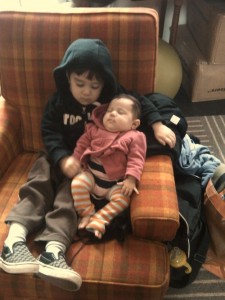 When I entered the store, I immediately spotted Chana Leah and her baby F.S. F.S. was lying on her stomach smiling and looking adorable. She is super cute, and it was the first time I met her in person, at six months old.
The baby wearing meeting was really fun! I was exposed to many different kinds of woven wraps. Chana Leah let me try on her woven wrap which is called a DIDYMOS. Samara loved it and fell asleep in it after a minute or two of being in it.
Woven wraps are different from the Moby Wrap, which is stretchy, and feel more secure to me than a regular fabric wrap. Needless to say, I believe I am now a woven wrap convert.
In addition to learning more about baby wearing, I also met a really nice mom.
She has two kids that are 18 months apart. Both of her kids are in the toddler phase now.
She gave me a sound piece of advice about caring for a newborn and a 2 3/4 year old.
“Just remember, you are doing important work,” she said. “All you have to do is take care of your kids right now, don’t worry about anything else, or anybody else’s expectations.”
Her words made me feel a little more sane.
I got an opportunity to speak with the owner of Caribou Baby, Adriane Stare, who was super cool. Ari was running all over the store, and in the process he managed to knock over a giant rack of baby carriers. I was horrified.
“Don’t worry,” she said “I have a toddler, I totally understand how it is.” Then she proceeded to tell me how cute Ari was, even after he tried to destroy her store. That was very kind of her.
After the meeting, Chana Leah and I said our goodbyes, and the kids and I headed home.
I’m glad I went to the meeting after all. It was a lot of fun even though it was a bit of a misadventure getting there.
Tell me, do you wear your baby? What baby carrier or wrap do you use?