Home/Uncategorized/How Do People Have Two Kids?
Previous Next

Today was supposed to be a rather simple day, except that everything became increasingly complicated once I woke up.

Ari slept in til 9:00am. We needed to go to Target to use a diaper coupon. When I realized what time it was I rushed out of bed, quickly fed him and myself, downed some coffee and attempted to dress him in the kitchen. He refused to get dressed.

I kindly explained that he had to put the blue shirt on first before wearing the sweater. He tried to protest, but I ignored his whining and threw the clothes over his head while he continued to scream.

The plan was to go to Target, get diapers and then head to the library for story time where we would meet up with his friend Miles.

As soon as we got out of the house he asked:
“Where’s Miles?”
“We’re going to see him in about a half hour,” I said grinding my teeth in frustration. “We have to get diapers first.” I explained.
“Diapers?” He asked
“Yes.” I replied
“I want Miles.” He said unconvinced.

I ignored his pleas for Miles and we headed to Target. I got the box of diapers and zoomed to the library. At the library, he decided that instead of listening to the story and singing songs, he wanted to remove as many books from the shelves and throw them onto the floor. I was too tired to stop him. I finally did stop him when the librarian exclaimed:
“You better stop that! I have to clean all those books up!”

After the library and a muffin break with Grandpa at a local coffee shop, we arrived home.
That was when the true drama began.

Ari wanted to carry this box of diapers up the stairs: 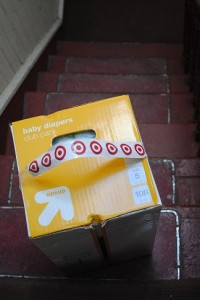 I told him that it was too heavy for him, but he insisted. So I said:
“Alright fine! Go ahead. Try!”
Of course, he couldn’t do it. So I helped him carry it up each step, one by one.
When we were almost at the top of the stairs he said:
“Downstairs!”
He wanted to bring the enormous box of diapers back down the stairs that we had taken painstaking measures to bring up the stairs. 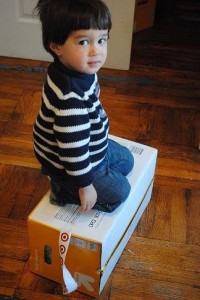 This was too much for me to handle. So I seized the box of diapers from him and walked up the remaining stairs ahead of him. He started to scream:
“No, mine! Mine!” And began crying.

He was so upset that he decided to throw these shoes: 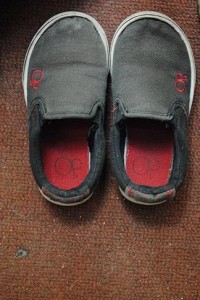 Down this flight of stairs: 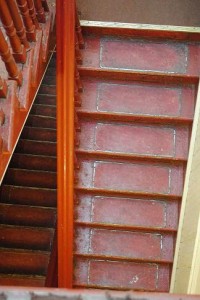 I was so exasperated at this point, I cannot even begin to tell you. I demanded that he go down the stairs and collect his shoes, which he begrudgingly did, but then he screamed:
“I need help!”
“What do you need help with?!” I asked ready to lie on the floor and surrender to the parenting gods.
“Carry me!”

So I dragged my 170 lb pregnant self down the stairs and carried him up our apartment.

I think I’d like to call it a day, but he’s only just begun: 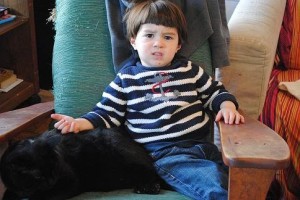