Home/Uncategorized/The Playground is Locked!
Previous Next

This morning, after I finally managed to get Ari to wear a hat because it was cold outside, we set out for the playground. When we arrived there at 9:30am, I found a disarming surprise: the playground was locked. 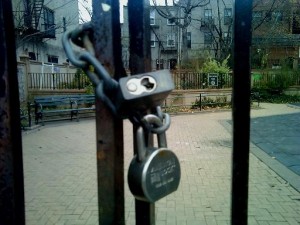 This seemed odd to me, since I’ve been to this playground way before 9:30am before. So I did what any other concerned citizen would do, I called 311. For those of you who don’t live in NYC, 311 is a general NYC information line.

The 311 operator informed me that according to the NYC Parks Department, playgrounds and parks are supposed to open from 6am- 1am unless the playground or park specifies otherwise. Outside of this particular playground there was a large set of rules: 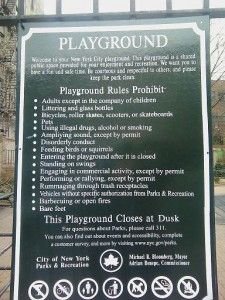 The only thing that this sign specifies (in terms of hours) is that the playground closes at dusk. So, by default, the playground should have been open at 6am! Ari was displeased. 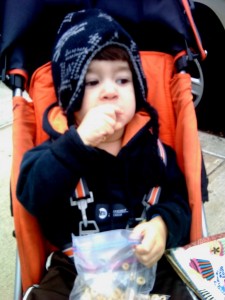 As I was on the phone with my friendly 311 operator, Adriana, another mom approached the locked playground gate with her toddler in a stroller.

“It’s locked.” I whispered to her, still on the phone with Adriana from 311.
“Again?!” She said visibly annoyed. “Everyday this happens. Sometimes the guy doesn’t come til 10am to open it.”

She suggested that I might take Ari to the playground attached to the Public School across the street. So we zoomed across the street. At the time the school was having a fire drill. I asked the Assistant Principal if it would be okay to use their playground after the fire drill was over. She said it wasn’t open to the general public during school hours; fair enough.

Since the entire school was outside, a teacher and I got to talking, and I explained to him about the locked playground across the street.
“Oh yeah,” he said rolling his eyes “The guy who used to open it up died. There’s a new guy doing it now, and he likes to sleep late.”
Now this struck me as absurd. I like to sleep late too, unfortunately I don’t have that luxury.
But that’s not the point. If it’s your job to unlock at gate at a certain time, shouldn’t you set an alarm? I mean, come on. I want that job!

The guy who unlocks the gate finally showed up at 10:30am. By that time, several parents and their kids had come and gone put off by the locked gate. The weird thing was he didn’t unlock the gate immediately. He looked around to see if anyone was around. I asked him:
“Do you unlock this gate?”
“Oh, it’s locked?” He replied innocently enough.
And with that he whipped out a set of keys and let us in. 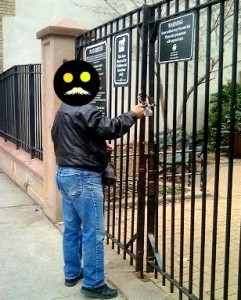 By that time, Ari had had it. Even though we’d gotten into the playground, he didn’t want to stay because there were no kids there. The parents and kids in tow had all given up on this playground due to the locked gate. 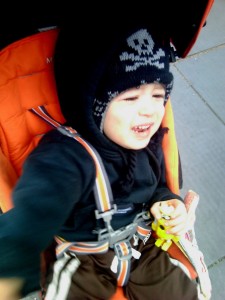 So we left, and hit up a bigger playground that was much further away. 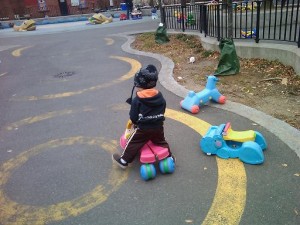 And so, my friends, that is the story of the locked playground. That guy is lucky to have a job that allows him to “sleep late.”