Home/Uncategorized/Glued to The Couch
Previous Next

I worked every single day this week and I am utterly exhausted. I’m lying on the couch and Ari is watching Blue’s Clues while playing with my toe nail. Now he’s trying to stand on his head. 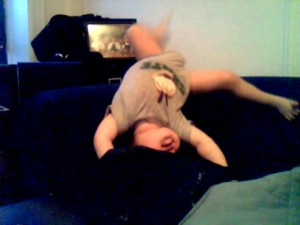 I don’t understand how moms who work full-time do it. The couch is my only friend at this moment in time. I won’t be leaving it for some time.

The problem is this, Ari doesn’t care that I’m exhausted. He wants to draw, run around like a maniac, chase the cats and be a toddler. I drew with him earlier, but once I sat on the couch, it was over.

I’m really having trouble forming a coherent thought and the idea of speaking in real sentences scares me. I blame these symptoms on standing on my feet for 8 hours straight for four days.

Ari just gave me a hug. Then he said:

My head just fell off.

What do I do when my kid wants to run around and act insane, but I have no energy to run after him?