I met a girl named Cindy on the B train. She had the most gorgeous blue tipped hair. I had to stop her because it was so beautiful I wanted to know what dye she used. 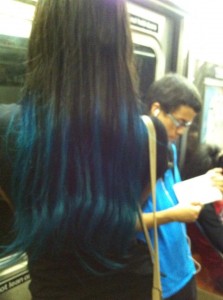 “Oh, I use Adore.” She said.
“I’ve heard of Adore!” I said “My friend used a combination of Adore and Pravana but she preferred Adore. It’s cheaper right?” I asked.
“Yeah, it’s like $3.00.”
“Awesome. I want to redo this part of my hair.” I said pointing to the pinkish part of my hair underneath my natural brown color.

“Do you think you’ll do blue?” She asked.
“Maybe,” I said. ” I like the darker blue you have there. So what do you do?” I asked Cindy.
“I work for Starbucks.” She said with a half smile.
“Nice. I’ve heard their health benefits are pretty decent.”
“They are. But…” She paused “They’re making me take this out.” She said with a frown pointing to her blue tipped hair
“Are you serious?” I asked in disbelief. “Why?”
“They have a strict appearance code. You’re not allowed to have weird colored hair.”
“I don’t understand.” I said. “That makes no sense.”

And I truly did not understand whatsoever. I don’t understand how having blue hair can effect the way that a person prepares coffee. I don’t comprehend why it matters if the person behind the Starbucks counter has a lip ring or a nose piercing, which according to Cindy they are not allowed to have.
It doesn’t make sense how a person’s outer appearance could impact their ability to perform a job.

I could, however, understand if the individual working for Starbucks hadn’t bathed in seven days and smelled badly. That would make sense because it would potentially be offensive to other customers and their coworkers.

The prohibition of blue hair, on the other hand, makes no sense to me. I wouldn’t bat an eyelash if the person behind the counter at my local coffee shop who handed me a cup of coffee happened to have blue, green, purple or rainbow fucking hair. I don’t understand how that would impact their ability to do their job in any capacity. In fact, I would go so far as to say that by not allowing people to express themselves with multi-colored hair that would qualify as a form of discrimination.

Furthermore, I don’t understand why lawyers, doctors, teachers, and other professionals are often not allowed to display “unconventional” hair colors. Again, if my son’s Kindergarten teacher had green hair, I would think it was awesome.

Why are we so quick to judge colorful hair?

To all three of those points I would ask the individual “why?” What evidence do you have that a person with purple hair is unprofessional or weird? I’ve met plenty of weirdos with plain old brown hair. What’s the big deal?

I will close with this story:

On the ride home from the museum, I met three teenage boys. They were ravers. Their names were Chris, Gerard, and Jeremy. I noticed them immediately because their arms were covered in elaborate patterned beaded bracelets.

“Wow! Those are awesome.” I told Jeremy.
“Thanks!” He said “I make them myself with beads and fishing wire.”
We got to talking and Jeremy told me that he and his buddies were headed to a rave in Brooklyn.
“I have a good friend who used to be into the rave scene hardcore, but he stepped away from it because it became dark.”
“Yeah,” Gerard said “People think that raves are all about drugs. But it’s not true. We go to enjoy the music and dance. Actually, the dancing is the best part. The party we were at yesterday security was really tight. There was no way drugs were getting in. They patted us all down.”

Gerard went on to tell me how much he loved dancing and how it fulfilled an essential need for him. When most people think of raves (myself included) the next thought is usually hardcore drug usage. But these boys were debunking that stereotype right in front of my eyes. They just liked to dance.

They got off the train at West 4th Street, but right before they left, Chris handed Samara a pink, white and green bracelet.
“Here you go. You can keep this one.” He said with a big smile.

When I got home, I knew I had to dye my hair blue.