Home/Uncategorized/Samara the Walker
Previous Next

Samara loves to walk. I’ve never seen a 2 year old walk as much as she does. I tested her walking ability out yesterday. We started out from our house and we walked 1/2 a mile down 4th Avenue toward the third street bridge. At any moment I was sure that she would stop and ask me to carry her, but she didn’t. She walked on.

It was a challenge for me, because my inclination as a native New Yorker is to walk fast. But with Samara holding my hand, I was forced to slow down my pace. We took turns pointing put trees to each other and different colored bicycles.
As we were crossing the third street bridge in the middle of the Gowanus Canal, Samara began to cry. She sat down so we could get a better view of the gray murky water.
“Samara! We have to go. We’re going to be late. Ari’s waiting for us at school.”
I pleaded with her.
She reached her arms up and I knew she needed a break. So I carried her a few blocks over the bridge.
Then I challenged her again:
“Do you want to walk?” I asked her. “Let’s go see Ari.”
Samara sighed “Okay. I wanna see Ari!”
With that she began to walk again. We made it just in time to pick up Ari from school. And the walk back to the train was easier because Samara had Ari by her side. 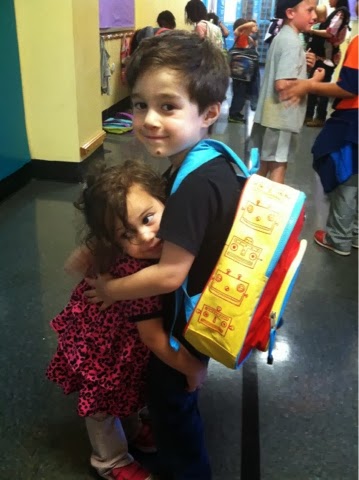