Ari wrote a story yesterday. As the Native Americans did, he recited his story aloud. My mom was there to record it: 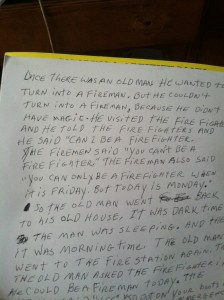 I felt it was important to document this momentous milestone (Ari’s first story) here. So without further ado, I present The Old Fireman:

The Old Fireman
By Ari

Then everyone in the city was sleeping.