Home/Uncategorized/ANN on Broadway
Previous Next

Last night I had the opportunity, thanks to the lovely Holly Rosen Fink of Culture Mom Media, to see ANN at Lincoln Center. 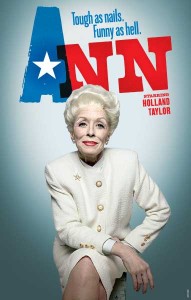 My cousin was in town visiting a graduate school she got into, so I decided treat her to a Broadway experience.

Did you know that Lincoln Center is considered Broadway? 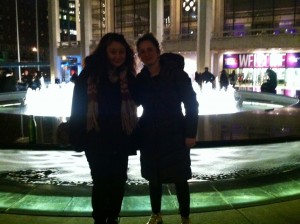 ANN is a one woman show starring the fabulous Holland Taylor. Taylor wrote and stars in this piece, which chronicles the life and accomplishments of the one and only Ann Richards, democratic governor of Texas.

The play takes place at an imaginary university. Ann speaks candidly to the audience telling her life story.

She talks about her childhood growing up as a daddy’s girl. Her father told her that she was smart and could do anything.

We hear about how Ann met her husband on the debate team in high school, a foreshadowing moment that she would later be involved in politics.

She combines humor with brutal honesty. At one point she tells the audience that she thinks she may have offended people when she went to a costume party dressed as a tampon. At another point she tells a dirty joke involving a great dane.

One of the most colorful parts of the play is when we see Ann sitting in her office, acting as the governor. She talks on the phone to Bill Clinton, teasing him about doing a crossword puzzle in pen. She speaks to several other government officials and “busts their chops” with each phone call.

During the intermission of the play, while Alissa and I were eating cake, cookies, and ginger ale at the concessions stand, we met a man who asked us:
“Are you a fan of Ann Richards?”
“I haven’t actually seen her in action.” I confessed.
“Oh, well you’ve got to look up on YouTube her 1988 Democratic Convention speech. Whenever I’m down, I watch it. “

So I looked it up when I got home, and it’s amazing; she’s amazing.

Not only is Ann Richards awesome, but I realized what an amazing job Holland Taylor did portraying her. Taylor becomes Ann.

One of my favorite moments in the play is when Ann talks about the day she knew she was going to run for governor. She and her husband were standing in a hot kitchen, and he turns to her and tells her that she should do it. She should run for governor. It was like time froze in that moment. She knew her whole life was about to change.

The real Ann Richards was an incredibly powerful and dynamic woman. Taylor portrays her as just that. I feel like I stepped into Ann’s life for two hours. I feel like I know her. I relate to her.

If you want to meet Ann, and hear her life story while laughing your head off, head over to Lincoln Center.