Ari got an early birthday present, his first bike! 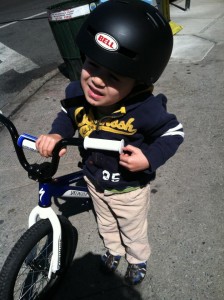 When I bought the bike, it had training wheels on it. Since getting the bike, I’ve been in and out of the bike shop, having the training wheels put on, and then taking them off. I was ambivalent about the training wheel situation, since I’ve taught kids to ride bikes before by just taking the pedals off the bike entirely.
One of the times that I was in the bike shop having the training wheels taken off, this guy approached me and said:
“You know how I taught my kids to ride a bike? I’m from Sweden, and we bike everywhere. I never bothered with training wheels. I used a broom to hold the bike up. I have four kids and it worked with all of them.”
“That’s a great idea!” I replied. And with that, Ari and I went to the 99 cents store to buy a broom. The broom ended up being $4.00, which I didn’t understand seeing as we were at the “99 cent store” where I believe things should cost 99 cents.
I bought the broom and tried it out. It worked great! 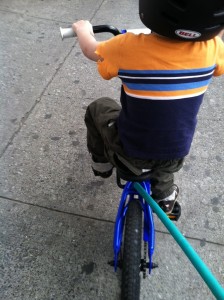 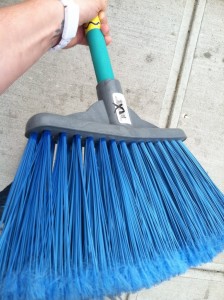 We were having an awesome time, until two guys passed by. One of the guys smiled and looked at our broom/biking experiment.
“Isn’t it cool?” I said “It actually works!”
The guy replied:
“Yeah, you know what else works? A belt.” And then looked over at my jeans, which were low on my hips.
He and his friend started to laugh. I was dumbfounded.
“Hey!” I shot back “That was really mean!”
That was all I would muster up. I had no witty comeback.
So we went back to biking with the broom. Then the broom snapped in half and broke!
Lesson learned: If you do try the broom/biking combination, I would recommend using a plastic broom as opposed to a wooden one.
Maybe I should stick to training wheels.
Also if a stranger gives you unwelcome wardrobe advice, quickly assess what they’re wearing and find a way to make fun of it.