The other day, Ari was finishing up his french toast. He left the crusts, as usual, and said:

“I all done Mommy!”
“Okay,” I said ‘Throw the rest in the garbage.”
“No!” He shot back “I not doing that! I don’t think so!”
Taken aback, I said:
“Don’t you talk to me like that!”
“I don’t think so!” He repeated defiantly.
“If you say it again, you’re going to time out!” I knew what was coming next. Predictably, he said:
“I DON’T THINK SO!”
I immediately picked him up and sat him in time out for two minutes. I set the stove timer so I would know when those two minutes were up. When the timer beeped, I removed him and asked:
“Do you know why you went to time out?”
“I don’t know.” He replied innocently.
I knelt down on my knees and looked him in the eyes.
“You don’t talk to mommy like that. You have to respect mommy.”
“Your eyes are Ari.” I couldn’t quite understand what he said at the point so I asked:
“What? My eyes are angry?”
“No!” He shook his head “Your eyes are ARI!”
I paused, and then it occurred to me, he couldn’t focus on anything I was saying because he saw his own reflection in my eyes. 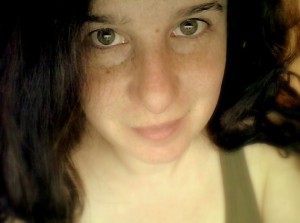 “Oh, you mean you see your reflection in my eyes?” I clarified.
“Yes!” He confirmed.
“That must be distracting.” I said.
“Yes!” He agreed.
“Okay, well…you need to respect mommy. Can you say it?”
“Respect mommy!” He repeated diligently.
Ari is in the eye of the beholder.