Recently, though I am ashamed to admit it, my son has become a television addict. Don’t be alarmed, he’s not watching Law and Order SVU or anything like that. He’s into two shows in particular: Blue’s Clues and Yo Gabba Gabba, which he calls “Cuckoo’s!” and “Bugga Bugga,” respectively.

Today I tried an experiment. At the suggestion of my sister-in-law, Rosa, I set the timer on the stove for thirty minutes. 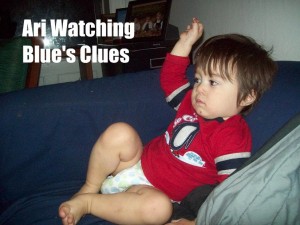 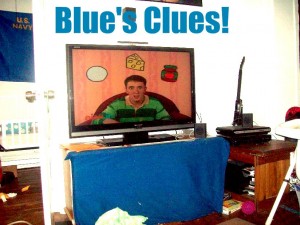 I can’t even show him the picture above because he will go bonkers.

Anyway, as tempting as it is to let him watch just “one more episode,” I had to draw the line somewhere. After one episode of Blue’s Clues, the timer hadn’t gone off yet, so I let him replay the episode for the remaining 8 minutes we had left on the stove timer. 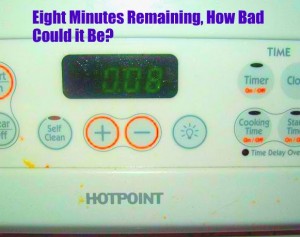 When the timer beeped, I shut the TV off. All hell broke loose. If you looked up the word “tantrum” in the dictionary, along with the definition, you might see this: 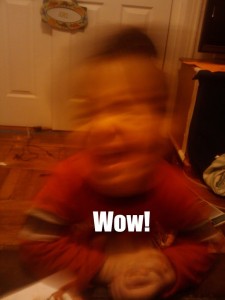 It was intense. I decided to try to ignore the tantrum. I said to Ari:
“I’ll be back when you’re done.” As I left the room he was screaming “Cuckoo’s! Cuckoo’s!!!!” Demanding to watch Blue’s Clues.

I waited an unbearable two minutes listening to him screaming in the next room. Finally, I couldn’t take it anymore. I re-entered the living room with him still screaming. After several futile attempts to get him to draw with me, he eventually accepted my offer of a glass of orange juice. Meanwhile I created several masterpieces by my lonesome: 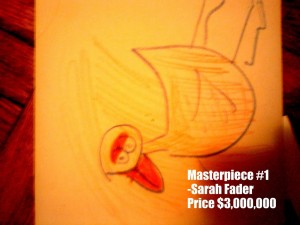 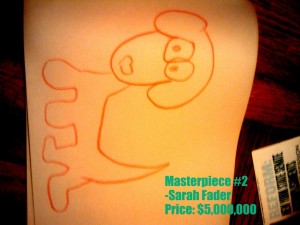 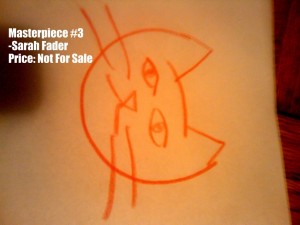 He drank the orange juice quickly, because he was terribly thirsty from screaming, I would imagine. Then he began to scream some more “Cuckoo’s!!!”

I was running out of ideas, and needed a solution before my head exploded. I was ready to throw in the proverbial television towel and turn on another episode of “Cuckoo’s.” But I didn’t.

I don’t know what came over me but I found a ball, and ran down our abnormally long hallway with it. To my surprise, my screaming child stopped screaming and started LAUGHING. Then he followed me! And we started to play ball! 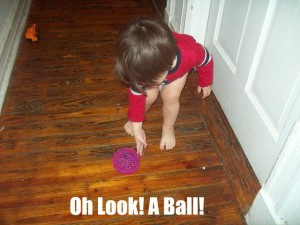 I couldn’t believe it. He forgot all about his precious Blue’s Clues! We played ball, I tickled him, turned him upside bunch of times, we drew, and it was all okay! Wow, I’m tired.