Last night, I decided to be a good girlfriend and drop Wil off at work. Ari was happy to be in the car and point out other cars on the road the whole way to our destination. We got to the airport and Wil opened the door to exit the car. That’s when the drama began. Ari shouted:

“It’s okay,” I comforted my screaming child “Daddy’s going to work. He’ll be back soon.”
He would have none of it.
We drove off and he was still screaming for daddy. I shouted over his cries:
“DO YOU WANT ME TO SING YOU A SONG?”
He replied:
“YEAH!!!!!”
I began a combination of yelling/singing:
“The wheels on the bus go round and round, round and round, round and round, the wheels on the bus go round and round, all through the town!”
That worked…for a while. Then the screaming commenced again. It occurred to me that he could be hungry. So I asked:
“Are you hungry?”
He replied:
“COOKIE!!!!”
Which I took to mean “Yes I am hungry.”
“Okay, okay,” I said trying to calm myself down yet feeling like I wanted to jump out of the car into oncoming traffic “We’ll stop and get something to eat. We can’t stop right now though.”
I wasn’t lying to him. We were on an incredibly busy road with no restaurants or stores in sight.
He was wailing:
“MAMA COOKIE MAMA COOKIE!”
All of a sudden I got a funny feeling something was not right. The wailing sounded muffled. I turned around to find that he had unbuckled his car seat and he was hanging to the side from his torso up, wailing away.
“ARI! SIT UP!” I yelled frantically.
I looked for a place to pull over, but there was none in sight.
I begged and pleaded with him to sit up. But he continued to lean over the side of his car seat crying and screaming. This child is Houdini! I thought to myself. How did he manage to unbuckle his car seat?
Finally, he sat up and I breathed in.
I almost started to cry when I saw the Dunkin’ Donuts in the distance. We pulled over, I took him out of the car seat and into Dunkin’ Donuts.
“Are you hungry?” I asked him once again
“Yeah,” Ari said smiling
“Do you want a bagel?”
“Yeah!” He said
“Can you give me a kiss?”
He did. 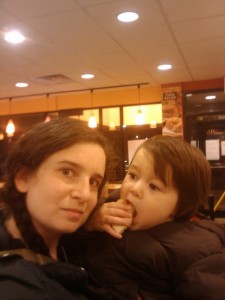 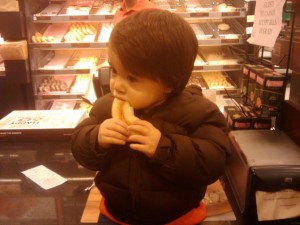