Home/Cats/For Cat Month – For Nana, (a.k.a. Nah and Neneh) – Guest Post
Previous Next

In 1999, I headed to Western Canada to escape the drudgery of small-town Atlantic Canada. In the hometown, unemployment was high and morale even lower.

I was fortunate to end up in Canmore, Alberta where I boarded with a family who would have a major impact on my life. When I first landed at their home, I was greeted firstly by a black cat who was one year old. Her name was Cass and I was just happy to be living in a house where a pet was around.

My time had reached about a month there when one day, one of the family members brought home a kitten who was barely the size of my hand. There seemed like nothing to her. It was astounding. They had named her Nola and for a few days there was the usual joy and excitement of having a cute kitten in the house. Of course Cass was not too happy about it. Shortly after that, some of the family left for what would be the better part of the summer to run their fishing camp in Northern Saskatchewan. Cass ended up going with most of the family. Nola was to stay behind at the house. Somehow, we bonded instantly. I was around quite a bit and did not go out too much in between work. Because there seemed to be people around, she was always in good company. On the evenings I worked or did go out, gradually there would be scratching at my bedroom door. It was her wanting to come in. Over the course of that summer, I saw a cat develop into a very loyal friend who was great company for me. 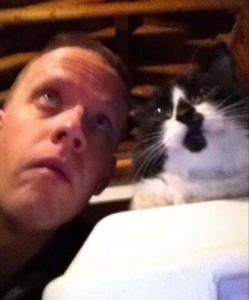 A short year and a half later, I moved into the city to find better work and be closer to more things. Nola and Cass had become very close as cats and went to live with the youngest daughter of the family who I remain friends with to this day. There was a brief period where I did not see Nola for several weeks. During those weeks she had grown substantially. When I would go over to visit, she always would come up to me. Her loyalty was strong in her young years.

Fast-forward again to a less than a year after my move into the city. The daughter of the family asked if I would consider adopting Nola. I resisted for a few months and never remembered why. One Friday afternoon after walking out on a job, Without barely a thought, I went for a drive after leaving that job to my friends place. I had just quit a job and had few prospects, but I decided to adopt a cat anyway. 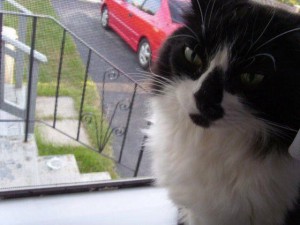 For the longest time it was just me and Nana. She was great company for me and even on her own. Sometime after I moved into my second apartment though it seemed that she needed some company. Interestingly, my friend and her now husband had moved into a rented house a short walk from where I lived. It was decided that Cass would move in with me. Two old friends were reunited!

Even with two very loyal cats in my life, Nana still was very loyal and devoted to me. When my wife and I moved into our first place together, she did have to adjust to not sleeping on the pillow beside me. It took a bit of an adjustment for her that she adapted to.

Nana was part of two great transitions in life. Moving to Northern Ontario, then moving back to Atlantic Canada. Her loyalty never changed. She was usually close by watching over what I was doing or hanging about near my feet. She often did this in silence. Her presence was always known. 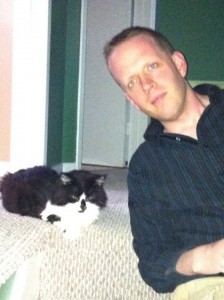 Less than a year after moving back to Atlantic Canada, we started to notice she was having some problems. She was spending lots of time drinking water and then almost right away going to the litterbox. The vets determined she was diabetic and in an early stage of Kidney Failure. Her diet was switched and we monitored her as best as we could. We did not realize the gravity of how worse her condition would get and so quickly.

One day in early April, it had become apparent that her system was failing her. On a Friday afternoon, my wife had taken her to the vet and there was nothing else that could be done. After I arrived home, we made the difficult decision to let Nana go. I could not even describe how crushed we felt. I could not be in the same room with her when we had to put her down. I took her out of the carrier and held on to her tightly for a few seconds. My grief overcame me. I gently placed her on the table where they had laid out a blanket for her then I left the room quickly. My wife stayed with her the whole time. I could not have done it. I sat in the car sobbing, completely overcome with grief. The monday morning after I returned to the day job thinking that somehow I could manage to get through the day. I made it through but not without completely coming apart on a few times. It’s hard to lose a friend. Especially one so loyal.

As much as I miss her, my thoughts of her now are positive priceless memories. The household remains a busy one with animals. Two dogs and three cats. Cass is still with us. Turning 18 this year and ruling the roost over all of us. 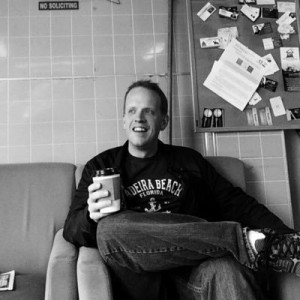 Dann Alexander is a freelance writer based in Nova Scotia, Canada. He is the Author of “Planned UnParenthood – Creating a Life Without Procreating”, a book about choosing not to have kids from a male perspective. Find him on Twitter @WriterDann and through www.dannalexander.com