I have so many internet friends and I love them all. I recently joined Twitter, and found that “The Familiars” were following me. If you don’t know about Twitter, this just means that “The Familiars” are aware of when I’ve written a new blog post or when I have something fantastic to report about my burgeoning writing career.

I was really intrigued by “The Familiars” profile picture.

I am a cat lover and there was this adorable tuxedo cat looking straight at me. I wrote to “The Familiars” to learn more. Then I found out the “The Familiars” is children’s book! It’s a fantasy based book about magical animals who help to save the day! I don’t know about you, but I wanted to know more. Thankfully, Adam Jay Epstein and Andrew Jacobson allowed this persistent Jewish mother and blogger to interview them about their book! 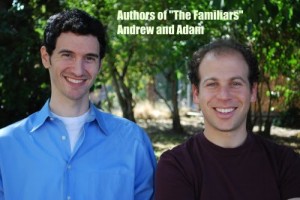 After three young wizard apprentices are kidnapped by the evil queen of a distant land, it is up to their familiars, their magical animal companions — a street smart alley cat, a precocious blue jay, and a bumbling tree frog — to save them.

The story of “The Familiars” began with a question:
“Are you familiar with what a familiar is?” Adam asked Andrew.
“No,” Andrew replied.
“A familiar is the animal companion to a wizard or witch,” Adam explained.

From that one seed of an idea, Vastia was born, a fantastical world filled with the authors’ shared love of animals and magic. What if these animals, typically relegated to the background, went on an adventure of their own? A few of the other specifics fell into place quickly. The protagonist would be an alley cat – much like the stray who had taken up residence in Adam’s backyard – black and white with a chunk missing from its ear. We were inspired by the fantasy literature, movies, and video games we grew up loving – Tolkien, Piers Anthony, D & D, the old Harryhausen films. But never before had we seen a fellowship of magical animals on a quest like this one!

2. Tell us about Andrew and Adam!

Adam Jay Epstein spent his childhood in Great Neck, New York, while Andrew Jacobson grew up in Milwaukee, Wisconsin, but the two met in a parking garage out in Los Angeles. We have been writing for film and television together ever since. This is our first book.

Adam Jay Epstein lives in Los Angeles with his wife, Jane, their two daughters, Penny and Olive, and a black-and-white alley cat who hangs out in their backyard. Andrew Jacobson lives with his soon-to-be-wife, Ashley, and their dog, Elvis, four traffic lights away.

The story of the writing of this book is much like the story of “The Familiars” itself: one of friendship and how teamwork can yield greater rewards than an adventure taken alone.

3. What audience does “The Familiars” appeal to?

We wrote this book for fantasy lovers of all ages, from middle readers and YA fans to any adult who loves animals or magic. We hope to capture the imaginations of fans of “Harry Potter,” “Lord of the Rings,” and “The Warriors.”

4. What are the messages you want to communicate to children in your book?

The theme of The Familiars is self worth – exploring the universal question of am I special? Like so many origin stories, our main hero, Aldwyn – the alley cat from Bridgetower – believes himself to be ordinary. But like Luke Skywalker, Frodo Baggins, or Harry Potter, Aldwyn discovers that there is in fact something extraordinary inside him. When Aldwyn is chosen as a familiar, he sees himself as nothing more than a talentless orphan with nothing to offer. But by the story’s end, he has confronted his own self-doubt and realized that he doesn’t have to be magical to be special.

Here is a picture of the alley cat – Ben – that lives in Adam’s backyard. Cover coming soon! 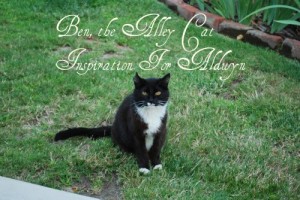 6. When can we look for “The Familiars” in stores?

Thanks A&A! I can’t wait to read you book!