Somebody once told me that kids who drink chocolate milk are less likely to want soda. I’m not so sure about this theory anymore.

Last night we ordered Mexican food. Wilhelm and I had enchiladas and my son had a quesadilla which he ate none of so we ended up giving him spaghetti instead.

In general, I am not a big soda drinker, but last night I was really craving a Coke. So I went for it. We were done eating and my son was running around like the “almost two year old” that he is. I must have spaced out for a moment because the next thing I realized, he was holding my Coke and taking a giant gulp of it. 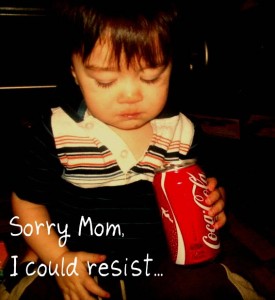 So much for the “drinking chocolate milk prevents soda consumption” theory.