I’m not sure whether I have to grieve the loss of New York or not. I have been in Portland for four months and it still feels weird. I don’t feel like it’s my home necessarily because I lived in New York for 37 years in both Manhattan and Brooklyn. The Pacific Northwest is new to me and I’m still figuring a lot of it out. In some ways, I am grieving the loss of my hometown because I don’t know when I’ll be back there again. I remember when I first moved to Portland, I was crying on the phone to my mom and I said: “I feel like I’m in prison.”  I didn’t feel like I was able to leave this place and I was trapped. I chose to move here and I had to deal with the consequences of leaving New York. I should have been excited, it was an adventure that I was wanting to take for so long. Now that I finally got to the west coast, I didn’t feel the same enthusiasm that I once imagined I would feel once I made my exodus west. Portland was this utopia that I imagined and everybody was nice and people did not get angry at you all the time like in New York. But now I find myself missing the realness from Brooklyn especially. I don’t like the passive aggressive culture here in the Pacific Northwest. I’m not saying everybody has that attitude but there are so many people who feel like they have to be nice to everybody on the surface and then stab them in the back. And that’s not New York at all, except for corporate America, which is another thing entirely. I don’t know if that is a unique feature of New York or are there other places in the country where people just tell it like it is? I worked hard my entire life to find my voice and be honest about how I feel and now I feel I am being discouraged from being myself. I don’t want to lose who I am living in a culture that doesn’t support honesty.

I am sad at times and I miss New York, but New York isn’t dead to me, that’s the weird thing. New York is alive except it’s living without me and I don’t want it to fade away in my memory. I want to know the coolest places to go get french fries and pizza. I want to know if something has changed and we suddenly know when the train is coming or not. That is something that I want to remember, the fact that the train has no actual schedule and other things like that. I want to be able to give directions to places and I want to know that they didn’t go out of business. Things change so quickly and I don’t want to forget where things are or what streets names are or how to get anywhere on the train. I spent years memorizing the subway maps and all the stops on the A train. I spent my whole life learning those things and now I have to hang onto those memories so that I can be proud of my New York heritage.

I am trying to remember who I am and also live in the Pacific Northwest but every time I express myself here there’s a pushback whether it means that somebody talks behind my back or another harsh consequence happens I don’t know how to be myself and live in the city. I miss New York so badly. But it’s not gone, New York, Brooklyn, Manhattan, and all of everything that I remember about my life before this place is a life. I just can’t see it right now, but one day I will again. One day. 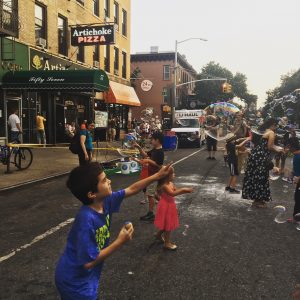