Home/Uncategorized/The Nothing Train to Nowhere – Part Ten
Previous Next

The path to Nowhere was winding. It lead me down the mountain and into the deep valley below. I was wearing my white Converse, which weren’t ideal hiking shoes. But I had to make due with what I had. It was a long way to Nowhere, apparently. I carefully maneuvered my way down the trail. I didn’t want to trip and fall. It was a long way down that mountain and if I tripped I wouldn’t survive.  Slowly, calculated, my movements matched my thought patterns.

I didn’t know who I was, what my name was, where I was, but I knew where I was going: to Nowhere.

After some considerable effort, with sweat dripping down my brow, I reached the bottom of the mountain. I breathed a deep breath in through my nose and released it through my mouth. I made it. I looked up to the top of the enormous overreacting mountain. It peered down at me, cowering over me, haunting me with its gaze. I knew it was time to keep going before it swallowed me whole with its sadness. There was something profoundly sad at the peak of that mountain, but I couldn’t quite articulate what that was. The snow was discolored, the clouds above it were an off-color shade of white. The mountain was awfully despondent. And I didn’t want to be around that anymore.

I pushed my exhausted body and mind forward. I walked down the dirt road in front of me. There was gray mist ahead. It was hard to see and I didn’t have my glasses. I’d lost them somewhere along the way with him. Whoever he was, I didn’t know. But he was gone, I thought. I pushed forward through the mist. Through the loss. Through what I lost was where I was supposed to be going. I couldn’t be sure.

Along the way there was a giant oak tree. It was so beautiful I had to stop. I walked right up to it and hugged it close to my body. I felt the bark touch my breasts. It made me angry, that tree. It hurt me, it betrayed me to the core and I hated it with all my being. I shot backward and punched it with my fists. I kept punching and punching until my fists began to bleed. I started to cry. The tears ran down my face onto the blood on my hands, washing away what was unclean. Leaving behind the hurt, the sadness, the loss, the unknown. I hated that fucking tree. I wanted it to die along with the memories that I couldn’t recall.

I walked onward, following the second sign I saw:

There it was. I had been walking for days, at this point. I hadn’t eaten, hadn’t slept, couldn’t think of anything else but leaving this place. I followed a pigeon through the mist. She told me to follow her. At least I think she did. I don’t know. I couldn’t really hear her, because I was screaming, or crying, or holding my ears. None of it mattered really. It just meant that I needed to keep going through the fog. I knew Nowhere was near. And that train station had a lot of pigeons to get advice from. 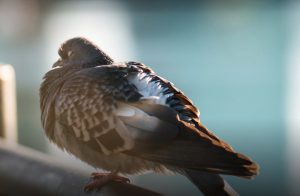