I sat in the seat next to the weird elderly man with the dusty hat. I cried and cried. I could stop those tears from coming. Even after he told me to put the past away I couldn’t, wouldn’t, shouldn’t didn’t. It was the book and we were supposed to write it together but he’d left me.

I didn’t know his name.

It was starting to come back to me. I knew there was a man. But I couldn’t picture his face or who he was. All I knew is that he shattered me into a million pieces kind of like Noah’s Ark. Did that even happen? Did Noah’s Ark shatter? I don’t know. I closed my eyes and tried to imagine his face. This man who had taken everything from me. I couldn’t get there.

The train was slow and steady on the way to Nowhere. It was a relief to rest my eyes and my soul. I missed him, whoever he was. He was somehow a part of me.

The train slowed. We were approaching the station, the destination, Nowhere. I couldn’t waste anymore time. It was time to find out who I was. I wasn’t even hungry anymore. My soul had been replenished by the sleep. I stood up quickly and ran to the doors of the train. I tapped my foot impatiently. I waited for them to open.

“What are you doing?” Asked the elderly man grumpily.

My name hit me hard in the face. I was Louise, not Julia. And he knew it. He knew who I was. As I was beginning to recover from the shock of being told who I truly was, the train doors opened. I stepped out into the daylight. There he was, standing there. He had blonde sandy hair and a subtle smile. I knew him. He had broken me. He had torn my heart to shreds in the woods. I walked toward him transfixed by his gaze. He was standing just beneath the train platform inside of the station at Nowhere.

“Fuck you.” I responded.

“All right. I deserve that.” He responded.

“You told me to forget myself.”  I said with tears welling up in my eyes.

“Of loving you.” He took his hand and stroked my face.

He looked deep into my eyes. He brushed my hair away from my eyes and kissed me deeply on the mouth.

The pigeons looked at us like we had some food to give them. I didn’t have anything and I felt guilty. They had been so kind to me. They had looked after me when I lost myself. Those pigeons knew who I was more than I did. It was clear that I couldn’t lose myself again. Not now and not ever.

“I love you Ian. But you will never take my identity away again.” I said.

The pigeons looked at me. They looked and they didn’t know what was next for us. So we stood there staring into each other’s eyes. Because this was my happy ending or not. I wasn’t sure. But I knew for sure that there was one thing I could never do again – be Julia. I was Louise. I would eat more than bread, I would be more than a stranger. I would never lose myself in hurt or anger again or maybe I would. Because life is like that sometimes.

So this is my story.

And this is Nowhere.

I hope you find a pigeon you can talk to sometime.

They always know the answers. 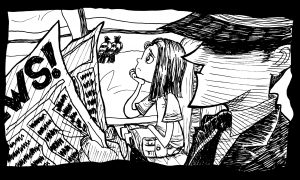