When you were a kid, did you want to have the same job or a different job than your parents when you grew up?

My parents had various jobs when I was growing up on the Upper-West-Side of Manhattan. My dad worked as a records manager. When I was younger I didn’t know what that meant. I thought he did something with “records” as in music producing discs of wonder. It turned out he managed a file room, which was good for him since he was extremely organized and enjoy color coding things.

My mom wrote people’s resumes and also articles for newspapers. One time, when I was six-years-old I was in The Daily News eating a salmon burger. It’s true. I have a picture somewhere. She also wrote all the time for different reasons. She worked in P.R. for a while where she was writing.

I had no interest in being a records manager, but I did want to be a writer. It was my life goal. Sometimes, I can say it with confidence: I am a writer. Other times, I feel awkward and full of self doubt, which probably means that I’m a writer.

I am also a cat sometimes: 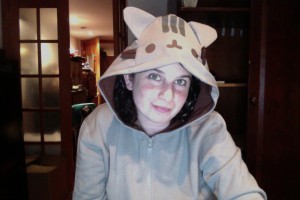