Home/Uncategorized/A Train, A Ferry, and An Exclusive Screening in New Jersey
Previous Next

” I really want to see Equestria Girls 2. You said we could see it today.”

It was true. I did tell him that we would see this My Little Pony based film on a Sunday. Unfortunately, when I searched online for where it was playing near us, I only came up with one movie theater: Bayonne Jersey at 3pm. It was now 2:05pm.

We live in Brooklyn and I have no sense of time so I called the movie theater and asked them how long it would take to get to Bayonne.

“Hi, how long will it take to get to Bayonne from Brooklyn?” I asked the movie theater person on the other end. “Is there any chance we can make the 3pm show of Equestria Girls 2? Are there still tickets left?”

“Oh yeah, you’ll probably miss the first 10 minutes but you’ll make it. I’ve only sold a couple of tickets so you’re fine.”

He went on to give me directions to the theater that involved taking the PATH train and some other mysterious train called “the light rail.” So at 2:10pm I threw some socks and shoes on Ari and Samara and we were out the door.

We took the 3 train into the city and got off at The World Trade Center to get on the PATH train. There was one problem, the PATH train wasn’t running this weekend! As soon as we got to the station there was a man in a uniform shaking his head with a serious expression. I started to sweat. We could not miss this movie. I couldn’t deal with more tears.

“We’re trying to get to Bayonne! Is there another way to get there?” I asked frantically.

“Yeah. You can take the ferry. Just walk straight.”

Well, “just walk straight” was an extremely vague direction considering the fact that it was physically impossible to do so. We ran into scaffolding and shit load of tourists who kept looking up and preventing us from walking “straight.” We managed to wade through the non-native New Yorkers and get to the ferry dock.

Ari, Samara and I hopped aboard the ferry when Samara announced: “I have to pee!” There was another problem. The ferry did not have a bathroom.

“Just hold it. We’ll find a bathroom when we get off the ferry.” I reassured her and myself, for that matter.

“Okay!” She said going with the flow (or against the flow) thank goodness.

As soon as we got to New Jersey I had no idea where to go next. So I asked some natives who were wearing running shorts and carrying iced coffees where this thing called “the light rail” was. Thankfully they lead us in the right direction. 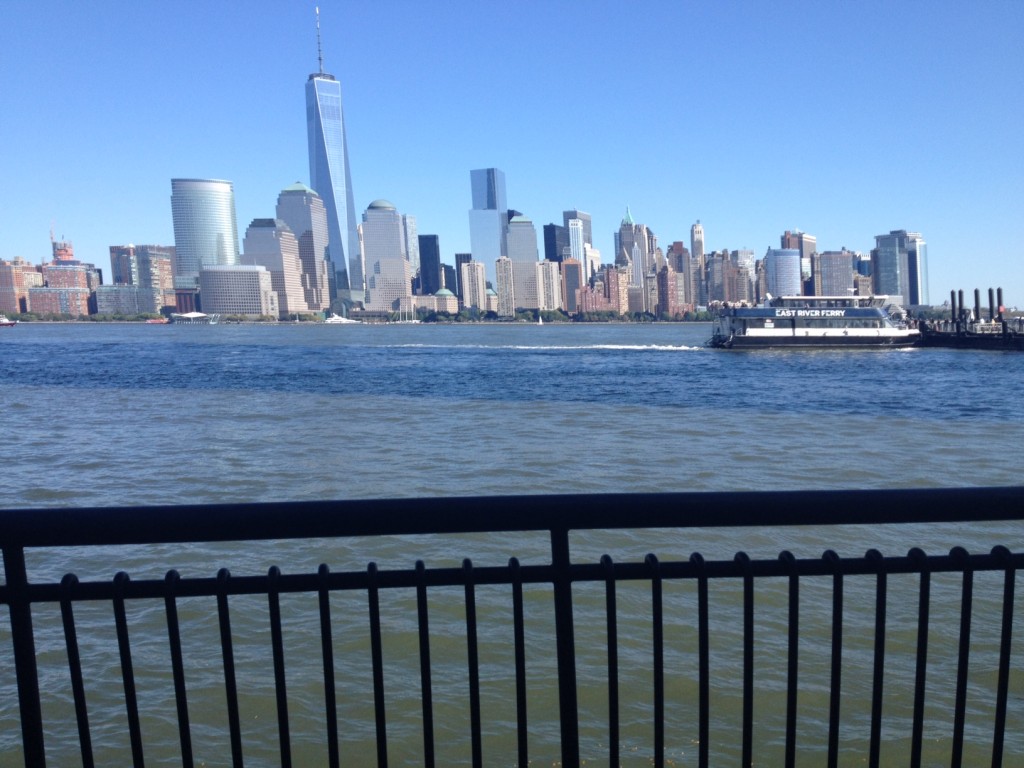 “Mommy, are we gonna make the movie?” Ari asked nervously.

“I think so.” I said calculating that we would still probably make the majority of the film just missing the previews. I looked at the light rail train schedule. It told me that there was a train coming in 10 minutes.

“Mommy, I have to pee SO badly.” Samara said.

SHIT! I forgot about that.

There was still no bathroom in site, so I found a decent corner where she could pee. She’s only 3. Of course seeing Samara pee outside, Ari wanted to do the same thing.

“Mommy, I have to pee SO badly.” He said, trying to convince me.

“You can wait until we get to the movie theater.” I told him.

Finally the light rail came and we got on. It seemed like forever but we finally arrived at our stop. Some nice teenagers pointed us in the direction of the South Cove Stadium 12 Theater.

We purchased our tickets and went inside to watch Equestria Girls 2. I asked the clerk behind the glass how much we had missed.

“It’s about 15 minutes into the show.” She reassured us.

The kids loved the movie and were dancing along to all the songs. But when it ended Ari had a sad expression on his face.

“I really wanted to see the whole thing.” He said looking as if he might cry.

When the credits ended I had an idea. One of the ushers came into the theater to begin cleaning up.

“What time is the next showing in this theater?”

He opened a spreadsheet that he had in his pants pocket.

“I was wondering if you could do us a favor,” I began tentatively “We came all the way from Brooklyn and we missed the first 15 minutes of the show. Would it be possible to watch the beginning of the movie again?”

“Sure,” He said with a wink “No problem, I’ll tell the guy to reset it from the beginning.”

I couldn’t believe how nice he was. When I told Ari and Samara the news that they were going to get to watch the movie one more time, they were so excited. I explained to them that this was extremely rare occurrence and that we should thank the movie theater usher for being so generous, and we did profusely!

The exodus from Brooklyn to Bayonne was made complete by smiling children at the end of the journey.