Home/Uncategorized/Guest Post: Two-Timing Eric Gets What He Deserves by Karen Song
Previous Next

My daughter Kellie is a really sweet kid. She is 17 and still a bit shy and insecure but really seems to be coming into her own. And she is really blossoming in terms of her appearance and the boys are starting to take notice. She is on the cheerleading squad and about a year ago a boy named Eric who is a star football player approached her after cheerleading practice.

After chatting for a bit, he asked her out on a date. She was thrilled beyond belief! This would be her first date and she couldn’t believe he even knew who she was. But then after a phone conversation or two, she didn’t hear from him, and the days went by and he never followed up on the date that he had set. She was crushed, though not totally shocked, since her friends had warned her that he was a bit of a jerk.

Then, to add insult to injury, she discovered he just started dating another girl named Natalie who is very pretty, popular and well, rather buxom too. Needless to say, fair or not, she was quite resentful toward Natalie and bitter over the whole situation. However, I did have to chuckle when she said that she hated all girls with big boobs.

Well anyway, one day during lunch at the cafeteria, Natalie stopped by Kellie’s table to talk to her. She asked if it was true if Eric stood her up, which of course Kellie confirmed. Then Natalie told Kellie that she wanted her to watch something.  Natalie walked over to a completely unsuspecting Eric, where he was sitting at a lunch table with all of his football buddies. Then, in an academy award winning moment, she lifted his chin with one hand to get just the right angle….and SMACK! she slapped his face with the other.

Then Kellie overheard Natalie say: “you don’t get to juggle women and toss one aside for another. I want nothing more to do with you!”  Natalie walked off, not the least bit shaken by the incident according to Kellie.  Eric, on the other hand, sat there looking quite ashamed and embarrassed, rubbing his cheek.Natalie then came back to Kellie, gave her a hug, and told her that she never would have dated Eric had she known what he did to Kellie. WOW Just an amazing turn of events. Kellie was blown away by all of this and learned some very important lessons from this experience. 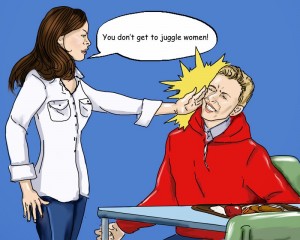