Home/Uncategorized/Guest Post: Dogs Are Assholes By Mia Fox
Previous Next 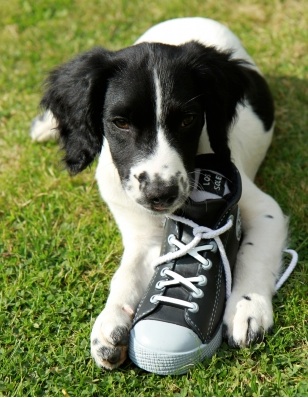 When I first got Casey, my Westie, well-meaning friends would shake their head, cluck their tongue, and comment under their breath that I better watch out because, “Well…you know how Terriers can be.” No, I didn’t know and whatever they were referring to, they were obviously wrong because Casey was a dream dog. That is, until Bean came along, a half-Westie/half-Schnauzer who observed Casey’s behavior, and converted him overnight.

When Huffington Post parenting blogger Sarah Fader wrote, “Three Year Olds Are A**Holes,” it propagated my own awareness and I realized that dogs can be a**holes too.

Those who have read my posts know that in addition to my two fur children, my husband and I also have three human children. I began to wonder about the root cause of the dogs’ behavioral problems. I read that a lack of discipline in dogs can lead to disrespectful behavior. At one point, Casey knew all of his commands, not only in English, but also in French (it was a phase I was going through) and sign language! In short, he was a furry honors student.

But, just like the youngest of human children tends to be the most free-spirited (a euphemism for ‘I’ll do whatever the heck I please because I’m so cute you don’t have the heart to tell me off), so is my youngest dog. Rather than Bean picking up Casey’s good habits, Casey learned every one of Bean’s naughty a**hole traits. Take a look at the evidence…

If you’re going to eat shoes, do it properly.

We’ve all seen the cartoons where the dog eats the owner’s slippers. That’s a normal dog. Mine do the a**hole thing — only destroying the inner lining, removing it with stealth-like skill so that they can fully coat it in saliva. This shows premeditation on their part as if they know just how long to suck and chomp to make the lining so disgustingly slimy that is can never lie flat in the shoe again, but not so ruined that my husband doesn’t take a look and announce, “I can fix this with a bit of super glue!” So much for my plan to buy new shoes.

My carpet is not your bathroom.

Our home office was recently re-carpeted and we were considering doing the same to the family room, after waiting ten years for the kids to be “old enough” not to spill or drag in mud. And then, along came Bean. He could’ve peed in the living room, forcing our hand to finally redecorate, but he decided the old, manky carpet wasn’t good enough for  his excrements. Knowing he had a**hole tendencies, I kept the office door closed, but one day, I slipped up and he followed me inside. And there, right in the middle of the room and right in front of me, he lifted his leg and I swear, he looked pleased with himself.

It’s been awhile since my human children woke me up in the middle of the night for feedings or comfort after nightmares. There was a time when I was used to waking up, but those days have long passed. The dogs, however, have decided that since they sleep during the day, why can’t I? They outweigh my need for uninterrupted sleep with the temptation of wild rabbits running amok in the garden and without fail, decide to wake me in a frenzied need to chase the rabbits away.

I’ve learned to put my shoes away each night away, always close the door to my office before I retire, and close the bedroom windows in spite of the summer heat in order to block out any noise that might reach the dogs’ ears.

I don’t exactly get a goodnight’s sleep because I toss and turn from the stifling heat, but at least my neighbor is sleeping, not having to listen to me calling for the dogs in the wee hours of the morning.