My son Ari is five years old and he loves the show My Little Pony. For months, I’ve been purchasing the My Little Pony figurines for my daughter, Samara, who is two years old. One day Ari wanted to watch a show on Netflix and he spotted the My Little Pony Friendship is Magic picture featuring six colorful ponies with enormous anime character
eyes. I figured I’d give the show a try, not knowing if it would hold his attention.
As it turned out, after the first episode he was hooked.
“Mommy, can I hold the ponies while I watch it?” He asked.
“Sure.” I said with a shrug. 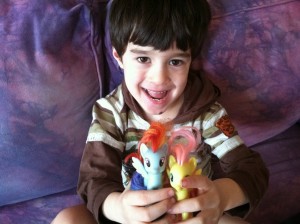 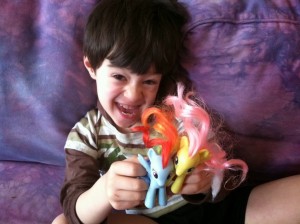 “I want that one.” He said pointing to Rainbow Dash.
He asked to watch episode after episode of My Little Pony all the while holding the tiny pony figurines in his lap.
When I had Ari, I imagined we’d share similar hobbies. I taught him to play chess and twenty questions, but our mutual love for My Little Pony was a surprise. You see, when I was a child, I was obsessed with My Little Pony. I would become infuriated when my brother would steal my precious My Little Pony figures holding them just out of my reach.
I remember one time my mom and I were in a toy store on the Upper East Side of Manhattan buying a birthday present for a friend of mine. I must have been six or seven years old. I begged my mom to get me another My Little Pony. I couldn’t understand why I wasn’t allowed to get just one more. I needed my fix. 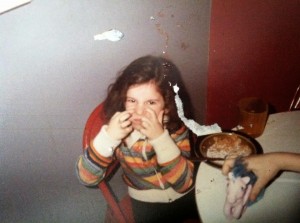 Flash forward to 27 years later, and my son has the same obsession that I once did. Funny, when I first noticed the new My Little Ponies I was certain it would be my daughter’s thing to collect every single one and covet them like precious jewels. Maybe I’m playing into
society’s stereotypes of what are “girl toys” and “boy toys.” My son certainly knocked those stereotypes out of the water.
I asked Ari what he likes so much about My Little Pony. His answer was simple:
“I just like them.”
There you have it. He just likes them.
When I confessed to my friends that Ari was a My Little Pony enthusiast, I found out there was a name for him. Ari is a Brony. A Brony is defined as a male fan of the show My Little Pony. That’s just what he is, a boy who likes My Little Pony.
I find it funny that there is a name for a boy who likes My Little Pony. It’s perfectly fine for boys and girls to watch My Little Pony as it appeals to children in general and not a particular gender. I have a conflicted relationship with the term “Brony.” On the one hand
I think it’s kind of great because it’s something to be proud of. Yo, what’s up? I’m a Brony, a boy who digs My Little Ponies.
On the other hand, it also plays into the stigma that the show is typically one that girls watch and there’s something weird about a boy watching it. Therefore, society does what we do best and it creates a label for someone who watches the show who isn’t the typical
demographic of a female child.
My point is, we can all love My Little Pony without labeling each other boys who like it and girls who like it. It’s a fun show.
In the words of Ari, on each episode of My Little Pony, “Every pony learns something.”