We were all devastated when our cat Simon died. Samara kept saying at random intervals. “Simey died,” or “Simey went bye bye.”

Just a few weeks before Simon died, Ari and I were passing by a local bodega on the way home from school when we noticed a kitten walk outside onto the sidewalk.

“Get her, Mommy! We have to save her or she might run into the street and get dead!” Ari said frantically. So we brought her back inside the deli. 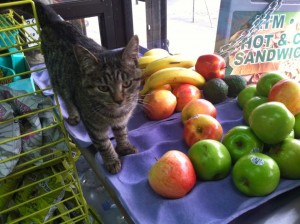 Ever since that day, we made it a point to visit the deli after school and see SuSu, which is what the store employees named her.

We would play with her and hold her. She particularly enjoyed batting my dangling earrings around. Sometimes she would just curl up with Ari on the floor. 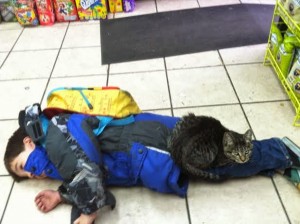 After a while, the kids and I became attached to SuSu.

One day, suddenly (after sixteen years of life) our cat Simon passed away. We were left with a empty place in our home and in our hearts.

The day Simon died, I went to the bodega to see if SuSu was there. In my mind, I thought, if she was there, I would ask the owner if we could have her. We’d bonded with her so much over the past couple of weeks, I felt as if she already was our cat. But SuSu was nowhere to be found.
“I think she’s taking a nap behind the paper towels up there.” Said the guy who worked behind the counter.

I came back the next day and there was SuSu happily laying in her favorite spot, next to the apples and bananas in the window sill of the deli. I turned to Ali, the owner of the deli and asked:
“Do you think we could have her? We’re really attached to her, and our cat just passed away.”
“Well, you know, the customers really love her,” Ali said “And we need a cat.”
“How about this, just think about it?” I asked hopefully.
“Okay, I’ll think about it.” He said with a small smile.

We returned to the bodega every day after that for several more days. Every couple of days I would ask Ali again:
“Do you think we could keep her?”
“I don’t know. We really need a cat. But I’ll think about it.” He’d always reply.

One day, I asked one my friend Amanda how to say “good deed” in Arabic. I can’t for the life of me remember how to say it now, but I came to Ali and told him in Arabic that giving us the cat would be a good deed. He smiled and said (predictably) “Okay, I’ll think about it.”

Today, I went into the deli to say hi to SuSu. Ali turned to me and said:
“So you can have her. But I will need your address and phone number. If you could bring her back once every couple of months for a week, if there’s a mouse or something, it’s a deal.”
“Really?” I asked in disbelief. “Thank you so much!”

I quickly scribbled my address and phone number on a tiny scrap of receipt paper and thanked Ali profusely. Then I picked up SuSu and carried her home in my arms since Ali didn’t have a cat carrier.

The other day, I asked Ari “What would you name SuSu if Ali says we can keep her?”
“Carly.” He said. I thought about it and it was the perfect name. What immediately sprang to mind was the folk artist Carly Simon, which made me think: Simon! Naming her Carly was like a homage to Simon.

So Carly is the newest member to our home, and we love her so much already. 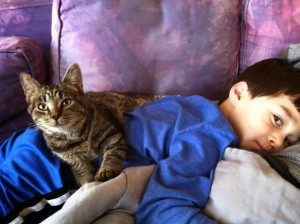