Today was Ari’s first day of Kindergarten. I set the alarm for 6:30am, but we ended up sleeping in until 7:30am. We were used to our summer non-schedule of sleeping in. As soon as Ari was up and dressed and ready to go, he went to say goodbye to Samara. I almost cried as he opened her door and said:
“It’s my first day of School, Samara. I’m gonna miss you.” 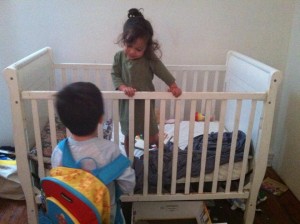 Next we stopped by Canteen for a chocolate muffin. It was the only way I could bribe Ari to leave the house before 8am.
Then we went to the taxi dispatch stand on my block and begged the dispatcher to look for an available driver to get us to school. We were really late. Unfortunately, the dispatcher was cranky.
“Hi sir, are there any drivers available? We’re really late for the first day of school.” I said pleading with him.
“Are you with somebody?” He said confused. “I don’t see anybody with you.” Then it occurred to me that Ari was too short for him to see since he was behind a glass window and elevated several feet above the ground.
“Yes yes! I’m with my five year old son.”
“This is not a dispatch facility!” Shouted the Taxi Dispatcher, even though there is a sign that reads “Dispatcher” on his desk behind the protective glass.
So Ari and I booked it down our block and then I saw him. There was a taxi driver filling his gas tank at the gas station.
“Hi!” I said overly excited to see the taxi driver. “Are you on duty? We are really late for school.”
“Where are you going?” I told him and he replied “Sure, get in.”
“Thank you so much!” I exclaimed.
“No problem dear, he has to get to school right?”
Ari was happy to get in that taxi. 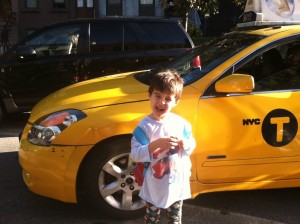 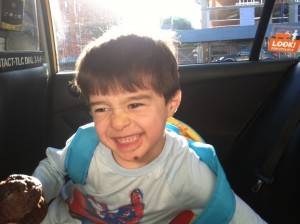 We got to school and Ari was ready for his first day of Kindergarten. 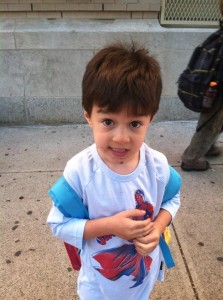 This year Ari is in an ICT class, which means he’ll be with children who have special needs as well as general education students. I requested that he be in an ICT class for Kindergarten because I love those particular teachers and because I think he’ll be a strong character and a support to the kids that have special needs.
When he approached the classroom, Ari was a bit shy. He hid his face in my dress. But soon he ran to the Magna-Tiles and began to build. 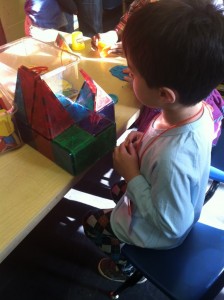 I left Ari to play in his new classroom while I attended a parent orientation in the school library. I snuck out of the orientation a little early so I could beat the crowd and get a student Metrocard for Ari from the office.
I returned to pick him up in his classroom, and was greeted with a big hug. Then we took the train over to downtown Brooklyn to pick up more school supplies. 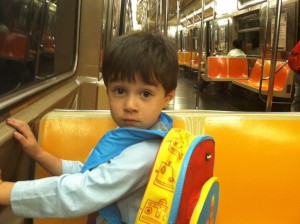 Some of the school supplies included unlined composition notebooks (which I didn’t even know existed) and a cat folder. 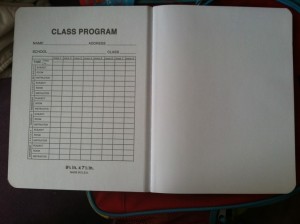 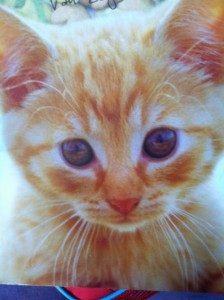 Ari picked out a yellow finger pointer that he wanted to take home. I don’t know why I let him buy it, but I did. 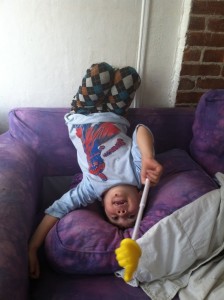 Day one of Kindergarten is complete!