When I first read the title of Steve’s Schirripa’s book, Big Daddy’s Rules, I have to admit, I was hesitant to read it. Being a strong maternal figure myself, my immediate reaction was, uh oh, am I going to like this book? 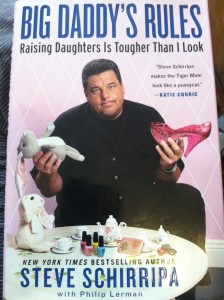 But then I opened it, and began reading and before I knew it, I was laughing aloud as I turned page after page.

Steve Schirripa is best known for his roles on The Sopranos and The Secret Life of the American Teenager.

Steve describes his journey of fatherhood, filled with hilarious bumps in the road.

My fears about this book being anti-feminist were relinquished with reading the first 15 pages. Here’s a particularly significant quote:

“So here’s the next rule for new dads: Get your hands dirty. And I mean, dirty. As in, change a goddamn diaper once in a while. Guys act like they don’t know how to change a diaper. These are the same guys who can pull an engine out of a two-ton ’92 Jeep Wrangler while drinking a beer and watching the ball game on a 12-inch TV they’ve had in the garage since the first bush administration, and they can’t change the diaper on a ten-pound baby? Please.” -Schirripa P. 15

Schirripa’s writing style is conversational, relatable and downright hilarious. Check this quote out:

“When it comes to my girls, all I want is to raise them to be good people, and I want them to be safe. That’s it. You ask me my philosophy? That’s it. Not complicated. I don’t need them to be brain surgeons. I don’t need them to make a lot of money. I don’t judge people by how much money they make, because in my business you meet a lot of assholes that I can’t stand who are really wealthy. You give me a garbage man and a rich asshole, I’m gonna go have a beer with the garbage man.” -Schirripa P. 61.

I love this guy! I want to hang out with Steve Schirripa.

That quote sums up the beauty of this book. It’s direct, it’s honest and it’s fun. And you need to read it.

Want to win a copy of Big Daddy’s Rules? Enter below! Winner will be announced 6/1/13

**Update: Back by popular demand, now I will pick two winners! Contest ends 6/16!