Tonight I had the opportunity thanks to the wonderful Holly Rosen Fink at Culture Mom Media to see the prequel to the Peter Pan story, Peter and The Star Catcher. 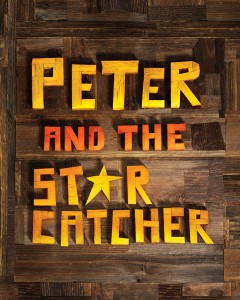 I took one of my oldest and closest friends, Livvy, to see the show. She was also my doula for Samara’s birth.

The play was held at New World Stages on West 50th Street. As soon as I stepped through the doors of the theater, I knew it looked familiar. Suddenly I realized that this place used to be the three dollar movie theater when I was in high school at F.H. LaGuardia High School of Music & Art and Performing Arts back in the 1990’s. It had transformed from a theater with sticky floors to a cultural institution with a giant mural that read “create.” 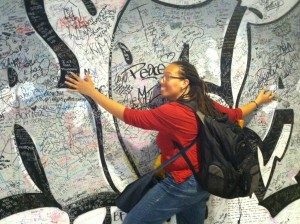 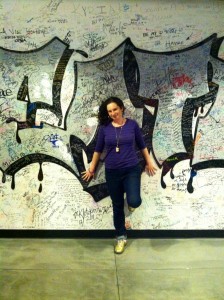 After embracing the space, Livvy and I headed into the theater to see the show.

Peter and The Star Catcher is about a boy who never had a home, a mother or a father. He spends his life in darkness. He meets a girl, Molly, who shows him that there is light in the world. She teaches him that girls are excellent leaders and that some cats can fly.

The show has a Greek chorus aspect to it. The cast tells the story of the boy by speaking in unison and becoming different roles from one second to the next. There are pirates, mermaids, an androgynous nanny, a crocodile, a mollusk, and many more colorful characters.

The story takes the audience on a roller coaster of an emotional journey. One moment I was feeling sad for the boy (who later earns the name Peter) and his lack of family, the next moment I was laughing hysterically as the man who will eventually become Captain Hook loses his hand by getting it stuck in a treasure chest full of sand.

As I watched the story unfold, my curiosity unleashed as well. I wondered how this no-named orphan boy would become the Peter Pan character that I grew up loving. Eventually that curiosity was quelled as the boy opened his heart to us and with it released something magical.

After seeing Peter and The Star Catcher, I’m ready to live in a world that has a little more magic.
Peter says he wants to live in a world where you never have to say you’re sorry. That got me thinking, maybe that’s possible. If we can get in touch with what we want in this life, maybe we don’t have to feel sorry. We could all learn something from spending time in Never Never Land.

Take a trip over to see Peter and get yourself some magic!