I signed Ari up to take the Gifted & Talented test for Kindergarten. The day came for him to take the test. No matter what the results are, I know my son is a bright kid. There’s no harm in taking the test to see if he gets into the program.

I didn’t prep him beforehand. We didn’t go over any study materials. If he gets in, he gets in. 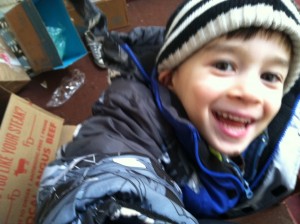 *Please excuse the recycling boxes that need to go outside in this picture.

The day before the test I told him:
“Tomorrow you’re going to go to a new school where you’ll show the people there all the shapes you know!”
“I don’t want to do that.” Ari replied.
“Well, afterwards you get ice cream.” I said on a whim.
“Okay!” He exclaimed.

The morning of the test it occurred to me that we would need his birth certificate. I asked Wil to open the safe to get it.
“Uh, babe…it’s not in here.”
“No. That’s not possible!” I exclaimed.
“Didn’t you take it with you when you registered him for school?” He asked.
“Oh that’s right. But I’m sure I put it back in the safe.”
But it wasn’t in the safe. I was panicking. I decided to take his social security card with us. Surely that would count for something. 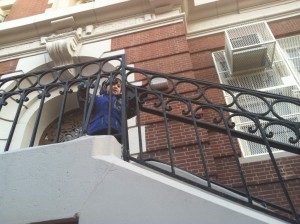 “Name?” Said the woman sitting at a cafeteria lunch table.
I gave her Ari’s name.
“Birth certificate?” She asked. Only her eyes looked up from her paper.
My heart sunk.
“Oh, I brought his social security card. Is that enough?”
“No, we need his birth certificate.”
“I looked in the safe this morning, and we couldn’t find it. Is there any way he can take the test?”
“I’ll talk to the supervisor.” Said the woman behind the cafeteria table with a slight smile. “We’ll see what we can do.”
Ari looked on, not knowing what was going on exactly. The woman exited the cafeteria in search of the supervisor.
“Call his doctor’s office. Maybe they can fax it over.” Said a mother who overheard the conversation.
“Good idea!” I replied. I called the doctor, but since it was Saturday, they had already closed.

After waiting for an excruciating ten minutes, the supervisor emerged.
“He can take the test, but you’ll have to scan and email a copy of his birth certificate to us.”
“Thank you!”

Ari was sent upstairs with a group of kids, wearing a green post it note with his birthday on it.

I waited.
There were a few parents there waiting for their four-year olds to emerge.
After an hour, one little girl emerged.
The mother and I were talking.
“My oldest, over there playing Angry Birds, has taken the test four times. She hasn’t gotten in. She’s kind of a space cadet though. My youngest is sharp. She’ll get it.”
“Excuse me.” Said another mother listening in “Did you say that your daughter has taken the test four times? And you’re making her take it again? That’s abuse!”
“Um, first of all that’s my business,” began the first mother. “And second of all she wants to take it.”
I didn’t know what to say, it was such an awkward moment and clearly these women were super competitive.

Ari arrived five minutes later.
“Hi Ari boo! What did you do on the test?”
“Nothing.” Ari said looking down.
“Did you play with puzzles?”
He nodded.
I tried to get more information out of him, but all he said was:
“I want ice cream!”

I asked the mothers who lived in the area if there was a good place to get ice cream in the neighborhood. They recommended an Italian gelato joint around the corner.

So we went! I thought I could get more information about the test out of Ari after he had some gelato in his system.

Ari got vanilla gelato and met a cat named Rocco. 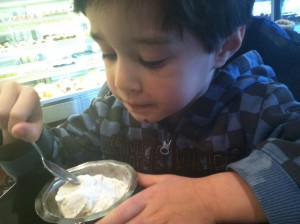 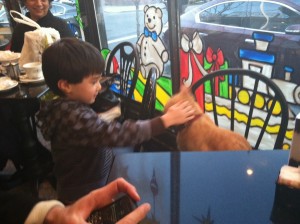 Post gelato, Ari revealed that he was interviewed by a woman who kept asking him “where?” and coloring in circles. He also said something about oranges and that he did a puzzle with numbers. That’s all he gave up.

I still can’t find his birth certificate. If I can’t locate it, they won’t send us the scores! I need to get a replacement copy as soon as possible.