Home/Uncategorized/8th Grade, I’m Cool With You Now
Previous Next

Ah, 8th grade. I remember going to school each morning, my heart palpitating in fear of what might happen that day. What sort of torture would I endure, who would I have to defend myself physically and/or emotionally from?

It was one of the hardest years of my life…and yet, I met my best friend. Hi Mint! 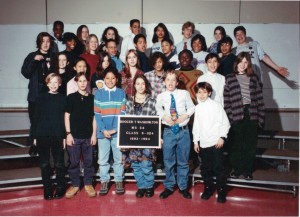 At the time I was experiencing these feeling, the ones where I thought I was a terrible human that nobody liked, I wanted to not exist.

Now, I look back at 8th grade, and I laugh a little.

I think about how unimportant most of those concerns were in reality. If I could transport some of the confidence I have as a 33 year-old back to 1993-1994, it would have been a better year.

I think about the people in this picture now. Now that I’m a little less self-absorbed. I never quite grew out of that, honestly. At the time, they were all going through issues of their own. Each person in this picture was struggling with something, I was just too wrapped up in my own issues to figure out what their personal trials were.

Ms. Hauser, you were a light during this trying time. I remember your kindness, your warmth, your infinite patience. Thank you for being that for me, for us.

Ms. Kapaldi, the librarian who recently passed away, thank you for being a safe haven for Mint and I when we conspicuously cut gym class to go hang out and read books.

I’m sorry for any hurtful things I said to any of you guys in pre-adolsecent mania. I think you’re all amazing people.

I’m going to keep this in mind when Ari and Samara enter junior high school.

Recently, I’ve been teaching middle school. I thought it would bring back traumatic memories, but it’s had the opposite effect. I love these kids. They’re capable of so much. They can have intelligent debates, and they say what they mean. There’s no guise, no nonsense, just truth. Maybe that’s how you felt about us, Ms. Hauser.

The lesson I learned from my 8th grade year is: be aware of yourself, and also be aware of others. You never know what someone else’s internal struggles might be.

Peace out everybody, I’m gonna go play some freeze tag.