One day, we were in a taxi and Ari spotted a road atlas in the driver’s side seat pocket.
“What is this, mommy?” He asked.
“These are maps,” I explained. “They show the driver different routes he can take to get where he needs to go.”
“Ohhhh!” He said with a fascinated expression. He spent the rest of the short taxi ride carefully examining the maps in the atlas, and tracing his finger along the thin blue and pink lines and over the Interstates.
When we were getting ready to exit the taxi, he picked up the atlas and attempted to stow away with it. I caught him thankfully, and explained that the atlas had to stay in the taxi, because it belonged to the driver.
“But I want a map!” He said nearly in tears.
“Well, maybe we can go to the bookstore some time and find our own atlas.”
“No! I want this map!”
I had to forcibly eject him from the taxi while he was still pining for the map.
When we got home we even searched grandma and grandpa’s library to see if they had any old atlases. Sadly, they didn’t.
I remember loving maps as a child. I can recall many instances where I would sit on my parent’s couch (I was older than Ari at the time, probably eight or nine) perusing the enormous Rand Mcnally World Atlas that was probably just as big as I was. I would look, mesmerized, at each page that showed a new colorful blob signifying a different place in the world. I didn’t quite understand the cultural aspect of what I was looking at, I just thought that these pink, purple, green, brown, and blue shapes were magical lands that I might someday explore.
I didn’t forget my promise to Ari. Today, we went to Barnes & Noble in search of an atlas. First, we went to the children’s section. He took one look at the atlases in kid’s section and said:
“No! I don’t want these. I want a real map!”
Okay, I thought, Let’s go to the travel section!
We took the elevator one flight down to where the “adult maps” were, and Ari found exactly what he was looking for. 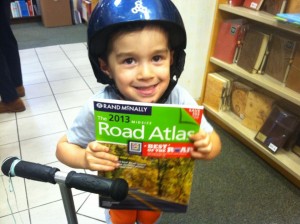 Today, I caught him in the kitchen studying the altas. He pointed to Ohio and asked
“Who lives here?”
Here’s to another map lover in the family!