Home/Uncategorized/My Children! My Africa! And Playtime!
Previous Next

Yesterday, my mom and I had the opportunity to see a play she’s been dying to see for a while, My Children! My Africa* 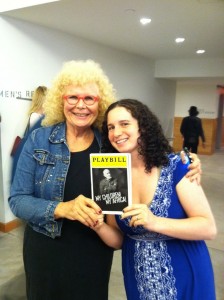 My Children! My Africa! was written By Athol Fugard in 1989, shortly before the end of apartheid in South Africa.
While we were seeing the show, Ari got to go back to one of his favorite places, Playtime!.
Playtime! offers childcare to kids ages 4-12 years of age while their parents go see a show!
Click here if you want to learn more.
As soon as the elevator doors opened at the third floor of the Playwrights Horizons theater, Ari ran out and greeted the lovely ladies from Sitter Studio with a giant wave. He then watched a bunch of kids board the elevator he was just on. Without even pausing for a second he completely abandoned me and my mom, and bolted for the elevator with the kids who were headed to Playtime! It was pretty hilarious.
“Wait!” said one of the ladies from Sitter Studio “Ari! You need a name tag!”
We all laughed as Ari ran back from the elevator to get his name tag.
After Ari went on his way to have fun, my mom and I went to The Signature Theater to see the show.
The play was held at The Linney performance space at the Signature Theater. The Signature Theater is one of the most beautiful theaters I’ve ever seen. It even has it’s own cafe and bookstore.
It also has this awesome touch screen thing, where you record your response to the play you’ve seen, and take your picture. 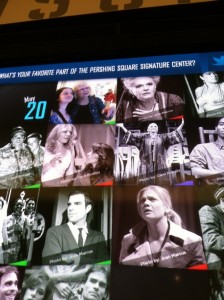 My Children! My Africa! was an intense play. It’s about a bright boy named Thami, living in South Africa during the political revolution in 1984. His teacher, Mr. M., believes in Thami so much that he considers him to be a protege. Mr. M. starts a debate team and pairs Thami with young White female student from another school named Isabel.
Thami and Isabel are vastly different, and their differences are particularly apparent when they debate together.
The acting in this show is phenomenal. I felt like I was being transported to a totally different world. The actors were not actors, they felt as if they became those characters. That’s when you know you’re seeing a great show, when you feel like it’s not acting at all.
My mom and I were near tears by the end of the play, it’s very powerful.
After the show, we went to retrieve Ari-Boo from Playtime. Apparently he had made a new friend! When we tried to exit the theater through the elevator, he shook his head and pointed to the stairwell, where his new friend was leaving.
When we exited the theater, we got to talking with his new friend, a six year-old boy, and his mom who is also, get this, a Blogger! Her name is Shari, and she blogs over at Earth Mother Just Means I’m Dusty.
I told her I hope we can meet up again and have a play date with the boys!
After the show, and Playtime for Ari, we went out to eat at a diner. Ari ate three bites of his grilled cheese and this happened: 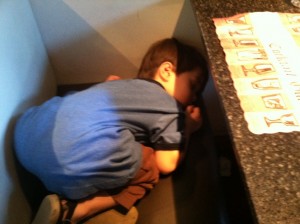 I guess he played pretty hard!
For information on My Children! My Africa click here
*We were able to see the show thanks to the amazing ladies at MamaDrama, courtesy of Playtime!