Home/Uncategorized/Apparently I Work at Home
Previous Next

I don’t know how this happened, but apparently I now work at home. 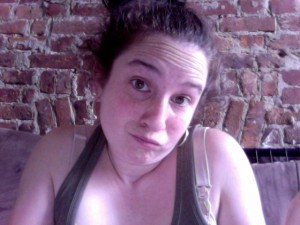 Please excuse my bra strap. I work at home, so I can wear whatever I want to work, thank you very much.
Let me tell you how this all happened. One day, I got an email from my best friend’s husband, who works in television production. He asked me “how fast do you type?” to which I replied “Um…pretty fast.” He then asked if I wanted to try some transcription. A friend of his worked for a production company and was in need of transcribers for raw footage for television shows. I was so happy that he thought of me, and told him as much. I said “why not?” and “I’ll give it a shot.”
I transcribed for shows on Nat Geo, Discovery Channel, Animal Planet, and TLC; I loved it, and (not to toot my own horn) I was good at it! I knew my auditory skills would come in handy some day!
Recently, I’ve been watching and transcribing a lot of Extreme Couponing, which makes me never want to pay for groceries again. When Ari watches me transcribe, he comments about all the food these people are getting. He also insists that all groceries cost $6.00 now for some reason.
But, I’ve discovered there are indeed challenges to working at home with kids.
First of all, it’s really tempting to stay in my pajamas: 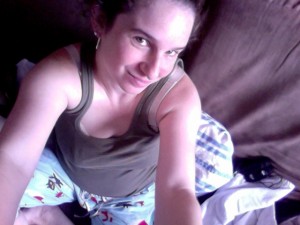 I mean, no one is watching me work, so what the hell, right? I can “pajama-ify” if I want to. I just created that verb. I work from home now, I can also create new words.

Another challenge is that Ari kind of hates it when I work. Yesterday he said:
“Mommy, I don’t like it when you do work every day.” I replied:
“I know you don’t like it, I don’t like it either.”
And it’s not that I don’t like the work per say. Like I said, I love transcribing, but I don’t like that it distracts from me spending time with my kids.
My mom shared with me that when she used to work from home writing resumes, my brother once said to her:
“I don’t like that typing!” Which meant that he, too, did not like it when she worked from home, which resembles Ari’s sentiments about my work.
One would think if one worked from home it would be easier to spend time with one’s kids. However, it’s just as hard to balance taking care of the kids and work as it would be if I worked outside the house. In fact, in some ways, it’s harder.
Sometimes, more often than I would like to admit, I resort to putting the TV on for Ari so I can finish up some work, and I end up feeling like a terrible mom.
Working from home is tough. I’m having a hard time balancing it all, spending time with my kids, taking them to the park, having play dates, getting my work done, showering, eating, getting dressed and generally functioning.
Am I alone here? Does anyone else have this problem?