Home/Uncategorized/A Sad Day- The End of Nursing
Previous Next

Today is a sad day. Today is the last day I will nurse Samara. 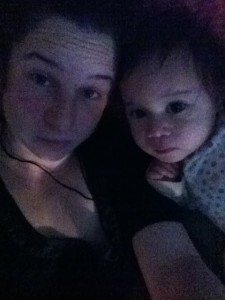 I didn’t want to wean her just yet, but I’m in a situation where I have to stop breastfeeding to preserve my own health. I have another MRSA infection, and it’s on my face. 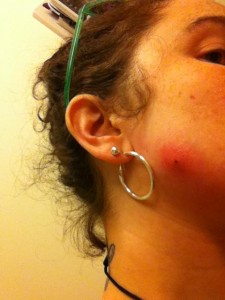 MRSA, for those of you that don’t know, is an more aggressive form of staph bacteria. It is not responsive to typical antibiotics and requires the use of stronger medications.
The dermatologist has prescribed me a more potent antibiotic that will probably make me shit my brains out, but will also ward off MRSA. I’m taking probiotics so here’s hoping they will combat the gastrointestinal war that is about to take place in my body.
Earlier today, the dermatologist laid it all out for me:
” The most effective treatment for an abscess is drainage. Since you’re breastfeeding there are limited medications that we can give you.” She said matter-of-factly.
“What would give me if wasn’t nursing?” I wanted to know.
“A stronger set of antibiotics. We want to knock MRSA out.”
“Okay…” I said, bewildered. I didn’t know what to say, or what the right decision was. Should I go with drainage alone, or opt for the more aggressive antibiotic?”
As I was sitting there staring into florescent light, having my facial abscess drained, I started to cry.
“I don’t want to do this again.”
“Okay…” said the stoic dermatologist as she continued to cut my face open.
When she was done, and I was sitting there with a facial bandaid, trying to reconcile what just happened to my mandible, we continued our conversation:
“I want to take the antibiotics.”
“That’s what I would do if I were you,” she said.
“She’s been nursing for a year, she’s had a lot of breast milk.” I said trying to reassure myself more than my emotionless dermatologist.
“She’ll be fine.” She said without smiling.
I know she’ll be fine. She’s had a year of breast milk, but I’ll miss the intimacy of nursing :(.