Today, the kids and I, along with my friends Donna, Rita and some of Rita’s friends, went on the 11th annual No Pants Subway Ride. Every year, since 2001, New Yorkers have been boarding the subway for one cold day in January and promptly removing their pants one person at a time, stop by stop.
It all started when Rita and I hung out in December. Rita and I see each other, on average, once every six months, and when we do hang out, it’s epic. There’s so much to catch up on. On our date, we ate some huevos rancheros at Perch, and Rita mentioned that she was planning on attending the No Pants Subway Ride in January.
“Wait, what?” I asked “I need to know about this immediately!”
Rita told me all about disrobing that occurred on the subway back in January 2011.
I told her to count me in, sans pants, for 2012.
Then I told my Donna about NPSR. She was psyched, and told me she was in too.
Today, January 8th 2012, we all met at the Stone House playground in Park Slope, and listened to this guy for instructions:
Then we were divided into small groups separated by the last number of our phone numbers. We all walked in a large group to the 9th Street train station. Once we boarded pants-less-ness ensued! 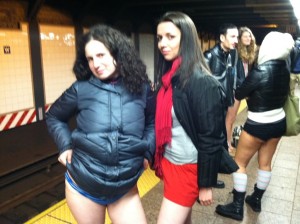 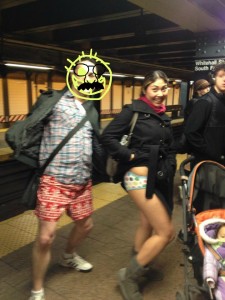 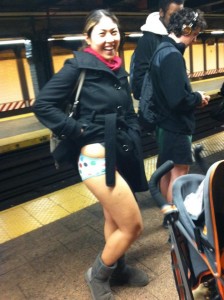 I was glad that right before the NPSR, I purchased a down coat from Brooklyn Industries for
50 % off. It kept me warm, when my legs were pants-less. Ari was so funny, he saw everyone removing his pants, and wanted to join in! 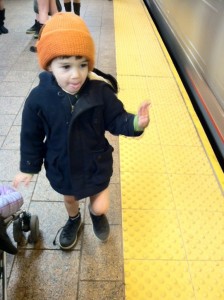 Pretty much right after he removed his pants, he demanded to put them back on, which was fine by me. A typical three-year old, he wanted to do the opposite of what everyone else was doing.
When we were on the R train, we ran into a nurse that treated Ari when he was in the hospital back in April. 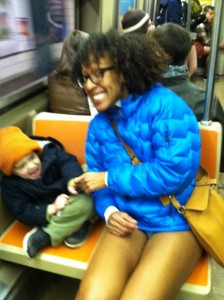 She was also, as you see, pants-less.
Samara was the youngest attendee of the NPSR. Here she is pre-ride. 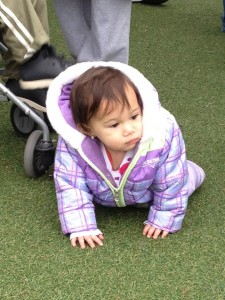 The NPSR ended at Union Square where Donna, Ari, and I took some glamorous pants-less shots. Here’s one of my favorites. 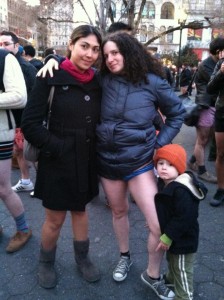 On the way home, Ari was so tired. Donna and I found an elevator, and went down into the subway, she with her pants back on, me with mine still off. She, headed uptown toward port authority, me downtown toward Brooklyn.
When the kids and I got on the train, Ari exclaimed:
“I want to sit down!” A woman scooted over and attempted to give him a seat next to her.
“No! I want a big seat!” He carried on.
Another passenger offered him her seat. He was flailing his limbs, and was thus too distracted to notice the empty seat set aside for him. So I physically transported him to the seat awaiting his behind. But even that wasn’t enough for this double Taurus child.
“I want two seats! One for me and one for you, mommy!” At this point there was audible laughter from the train passengers. A man graciously gave me his seat so I could sit next to my demanding child.
After we were all seated, Samara started kvetching, and clearly wanted to nurse. So I navigated through several million layers of clothing and nursed her. While I was doing that, this happened: 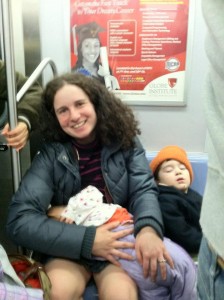 We had a blast! Thank you, Rita, for introducing us to the NPSR! We’ll be back next year!
If you want to know more about this pants-less extravaganza click here.