I subbed for Pre K the other day, and I was surrounded by four-year-olds, so I drew this with crayons: 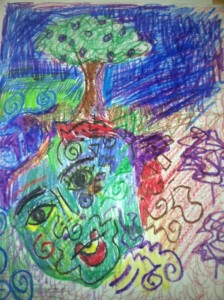 I love sitting down with the kids and drawing, it’s very relaxing.
This particular Pre K class gave me hope for next year. While I was making my masterpiece, I was talking to one of the parents, who happened to be volunteering in the class that day. I told her about Ari’s aggressive, defiant, and even combative behavior.
“How old is he now?” She asked
“Three.”
“Yeah, don’t worry,” She said “She was like that too,” she said gesturing to her daughter who was happily creating artwork with us.
“Really?” I said in disbelief looking at her child who appeared to be spirited but not aggressive by any means. “What did you do? How did deal with that behavior?”
“You know what, you basically just have to ride it out. Nothing much you do is going to change it. It’s a phase. One day, you’ll see, he’ll just stop. It’s an annoying period, but you get through it.”
I hope she’s onto something here. I’ve been trying to be more patient these days, but there’s only so much irrationality I can take. I can only watch my kid cry over a broken cookie so many times before I break myself.
But, then I thought, maybe she’s onto something. The 4-year-olds that I was teaching behaved markedly different from Ari. All of them did. I would say 95 % of the class actually listened and followed directions.
So maybe these defiant behaviors are part of a phase. Only time will tell, I suppose.
Can anyone attest to the difference between three and four?