Home/Uncategorized/The Muppets Are Back And They’ve Kidnapped Jack Black!
Previous Next

Yesterday, the kids, Aunt Mimi and I went to see The Muppets at the Lowes 84th Street theater in my old neighborhood, the upper west side of Manhattan. 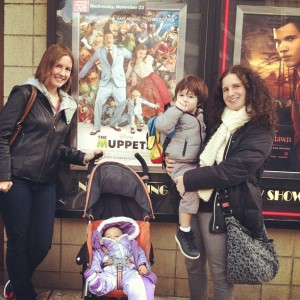 As a child of the 80’s, I was raised on the Muppet Movies, from The Muppet Movie to The Muppets Take Manhattan, the muppets were a part of my life from the time I could talk, and possibly before that because I have an older brother. He’s four years older, and my dad tells us he was afraid of Kermit the Frog, when Kermit did the news on Sesame Street.
I was excited to see the movie, because Aunt Mimi had raved about it. She said it was one of the best movies she had ever seen.
We arrived at the theater late, because we had to make a stop for gas, and Aunt Mimi and I were concerned that we might have missed the beginning of the movie. I was hoping we just skipped the previews. Thankfully, there was a Toy Story short before the movie began, so we didn’t miss the opening number!
The Muppets was a delight. Ari, saw his first movie, Up, when he was just over a year. He was mesmerised then by the animation and the colors. Now, he’s now three and half, and he was really able to appreciate the movie in a totally different way. He had never “met” the muppets before, and I was anxious to see what his reaction would be to them.
My parents must have clued him in to some of the muppet character profiles, because just after we parked the car, he before we entered the theater, he said something to Aunt Mimi and I about a pig and a frog. 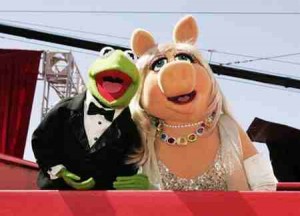 Ari was glued to the screen the whole movie. He only took one issue with the movie, he did not like the evil pig muppet, whom I can’t seem to find a picture of on the internet, but I’ll tell you this: if I ran into her in a dark alley I would be scared. 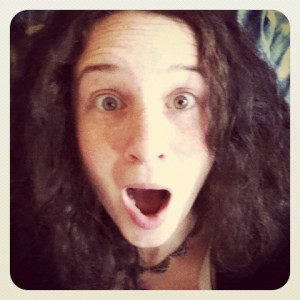 Samara is ten months now, and she was able to sit through most of the movie, which was big shock to me. She was sitting in Aunt Mimi’s lap munching on a Carrot Blueberry cream cheese muffin from Blue Sky Bakery. 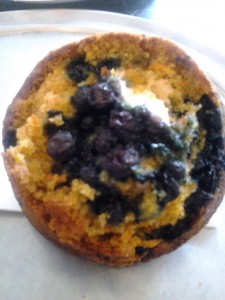 So that kept her calm most of the movie, until she needed to be changed. Aunt Mimi took her out and she cried the entire time she was away from me. Separation anxiety is awesome!
The movie was great. Jason Segel and Amy Adams are hilarious. Here’s the storyline, for those of you that don’t know, it’s about a muppet named Walter, who grows up with his human brother Gary in a place called Smalltown. Gary spends his life surrounded by humans, but has a lifetime obsession with The Muppets. Gary, his girlfriend Mary and Walter decide to make a trip to Los Angeles to meet the muppets. It also happens to be Mary and Gary’s 10th anniversary.
My favorite musical number was, hands down, was “Man or Muppet?” There were, of course, some old standards included in the film, including Rainbow Connection, and The Muppets Theme song.
One of the funniest parts of the movie was when the Muppets kidnapped Jack Black for their telethon. I can’t begin to tell you how hysterical that was. You have to see it for yourself.
Aunt Mimi was right. The Muppets was one of the best movies I’ve ever seen.
I don’t want to reveal too much about the movie. You need to stop what you’re doing immediately, shut down your computer, go outside, walk/drive/take the bus to the movie theater, buy your tickets and/or popcorn and see it immediately.
Have you seen The Muppets? What did you think?