Home/Uncategorized/It All Began With a Lost Earring
Previous Next

This morning, as Wil was changing Samara, he yelled:

“Babe! She’s missing an earring!”
“What?!” I shouted back. I was in the kitchen, which is at the complete opposite end of the apartment.
“Wait! I found it, it was on the changing table. But the back is gone!”
The next thing that occurred was that we each took turns trying to put the backless earring in Samara’s ear. One person would hold the baby while the other person would attempt to get the earring in the earring hole. Meanwhile Samara was not happy about this whatsoever. She screamed the whole time, mostly because she was being restrained and wanted to crawl around and eat things.
“I have to get a replacement pair of earrings from the doctor!” I exclaimed.
“What are you talking about?!” Wil replied “Just go get a pair of cheap earrings at the 99 cent store and use the backs.”
“No! They’re going to get infected!”
“Wait, maybe your mom has an earring back downstairs.” He said with a gleam in his eye.
He ran down to my parents place, and swiftly came back up with an earring back. But, alas, it didn’t fit!
I had to go to the dermatologist today, so I put it in my mind to find a pair of replacement earrings for Samara…somewhere…in Manhattan.
So, Ari fed Samara lunch and off we went to the city. 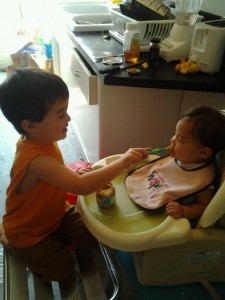 We got to the dermatologist, which is located in the fancy neighborhood otherwise known as the upper-east side. We were sitting in the pretentious waiting room with post-menopausal women awaiting their botox injections, when Ari decided he wanted to fill out my doctor paperwork for me. I told him that this was impossible, and asked if he might be interested in drawing on a piece of blank paper instead. He threw a gigantic tantrum. Needless to say, the botox crowd was not amused. Then he began to crawl all over the floor. Since he was already on the floor, I figured it was only fair that Samara join him. 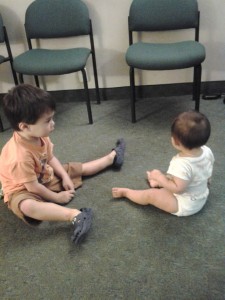 I told Ari that if he behaved, he could have a cookie after the dermatologist. That seemed to change his tune. We went to a fancy-schmancy coffee place and I only had enough cash to get one gigantic chocolate chip cookie and an iced decaf coffee. So I split the cookie in half, one had for each of us. He was very displeased about this. But then I realized that the fancy-schmancy coffee place took debit cards! Yipee! If you’re still reading this my favorite color is green. So I decided to splurge and get a brownie, which I promptly split in half. Ari was very pleased about this. Here are his halves: 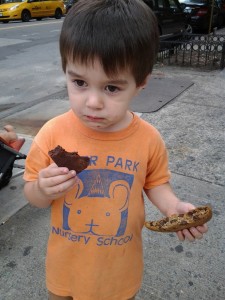 After he was thoroughly hyped up on refined sugar, he decided to finish off the rest of his cookie on top of our car. I don’t know why. 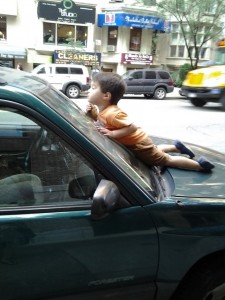 I’m having an MRI of my cervical spine tomorrow! Wish me luck.
What else? Oh right! Back to the earring. I stopped this teenage punk girl on the street and asked her where I might buy some replacement earring backs in the neighborhood.
“Oh…” she said “I don’t know about this neighborhood, but there’s this place on the West Side called Claire’s–“
“Yes, I know Claire’s!’ I said excitedly, thinking that this would be a great affordable option.
“I think it’s on 83rd, but I’m not sure, and I don’t want to steer you in the wrong direction. You should look it up.” She said with a half smile while looking down at the sidewalk.
I thanked her and went straight to my phone to find the Claire’s she spoke of. It turns out it was on 81st and Broadway, close enough.
We headed over to the West Side, and on the way to Claire’s we passed a coffee shop that has been there since my childhood. 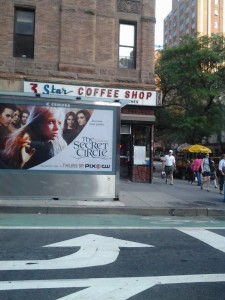 I honestly don’t know how this place is still in existence. The Upper West Side has become totally gentrified and has so many rich yuppies living in it. Most of the old businesses have shut down. Yay Three Star!
I told Ari that after we got Samara’s earrings, we would head to the playground. We got to Claire’s and a very kind sales girl gave me an earring back (that they use to pierce ears) for free! Hooray! She also put the back on Samara’s earring. I even got a pair of earrings for myself. 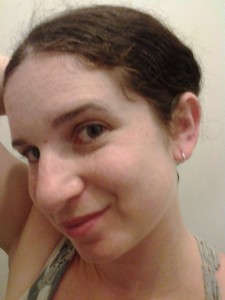 After we solved the earring crisis, I desperately had to pee. So we went to The Jackson Hole, another old restaurant on the Upper West Side, to use the facilities. Once Ari got wind of the fact that this place had grilled cheese sandwiches, he wanted to stay. He also referred the menu as a “magazine.” He said “Mommy, I want a magazine.” And I said “You mean a menu?” to which he replied “Yeah, a menu.” 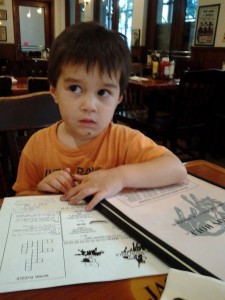 Ari had a grilled cheese (with cheddar cheese) and french fries, while I had an egg sandwich. Samara had Earth’s Best Sweet Potato and Chicken baby food.

By the time we finished eating, it was 7:00pm. But I promised Ari we would go to the playground, so we went…to Central Park and 85th Street, and it was totally empty. 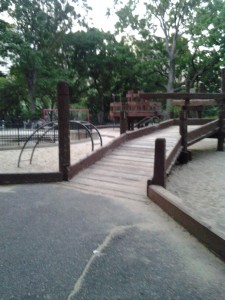 Thankfully, there was another playground across the way that had a few late dwellers in it, so Ari got a chance to play for a bit.
After we left the playground, it was almost 8pm. Wil gets out of work at 8:30, so I had the insane idea to drive to the airport and pick him up! When I called him, he tried to talk me out of it, but in the end, I think he was happy to have a ride home.
We got Wil, he drove home, and the kids passed out from exhaustion in the back seat.
After an epic day, I’m finally home and my bed is calling.
How was your day?