Home/Uncategorized/Samara’s a Person!
Previous Next

All of a sudden, Samara is no longer a lump, but rather a person.

When each of my kids were born, they seemed like little blobs that cried and pooped a lot. But now, Samara is seven months and she’s really starting to become expressive. She is quite a character.
Samara has decided that she loves cheese, anything from Cheddar to Havarti.
She crawls and sits up now, which makes life a little easier, but also more challenging because I have to watch her more carefully.
She loves playing with her big brother. Ari loves bossing her around, and hoarding his toys. They both enjoy screaming, because it’s something they can do together.
She has at least one tooth! There might be a second one on the way, but I know for a fact that there’s at least one out there. 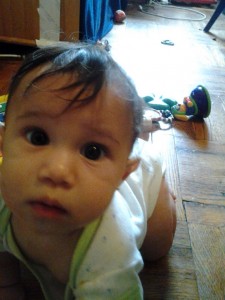 It’s wonderful to see Samara grow and change and become a “real person.” I wonder what she’ll be like at Ari’s age.
When (at what age) do you feel like your kid’s “personality” began to come out?